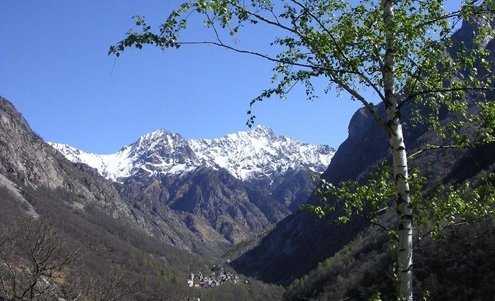 A look back at the village of Codera. Photos by Andrea Smith.
O

ur car emerges from a gallery on the SS36 past Lecco. The early morning sun lights up Lago di Como. Our destination is Val Codera in Italy’s Lombardy region near Switzerland.

What’s so special about Val Codera? Contrary to most alpine valleys that “open” to a view, Val Codera is all but closed and hard to spot. The “secret” entrance made for good refuge when Romans, Longobards, Spanish, French and Austrians took turns tramping through the territory.

Even today, it’s a valley without a road. Codera is one of three villages in the central Alps lived in year-round but accessible only on foot. The hike is a walk into the past.

We head to Novate Mezzola, a town 100 kilometers north of Milan on Lago Mezzola, a smaller lake above Lake Como. At Novate Mezzola (212 meters), we follow directions to Piandimezzo and then the Club Alpino Italiano (CAI) signs to the parking lot. Today, we are walking a long, medium-difficulty loop that takes in the villages of Codera and San Giorgio and back to Piandimezzo.

From the parking lot, we take the steps up the well-signed mule trail. After an ascent of 400 meters, we arrive at Avedèe (790 meters), a group of houses set on terraces. Two men dig their vegetable gardens. A cell phone repeater and cable lift for supplies are the only modern conveniences in view.

Now it will become an up and down route to Codera, a 600-meter climb in all.

down the rock face. Its spray raps on the tin roofs of the open galleries covering parts of the trail. A woodpecker taps in time.

It’s amazing to consider that not so long ago Codera was a thriving community involved in a kind of life that now seems light years away.

Granite mining anchored the economy for centuries. Before asphalt, granito sanfedelino helped pave whole cities. At one time, as many as 700 men worked the quarries. Stonecutters fashioned the cobblestones and cordoli, sidewalk curbs, still found in the centers of cities on the Lombardy plain. By the onset of World War II, newer and cheaper diminished the reliance on granite. By the 1970s the valley was depopulated.

Since then, the faction of the community that wants to build a road and the one that seeks to protect the valley have quarreled. Tempers flare at raucous meetings. There has been petty vandalism on both sides. The problem is how to maintain the life of the valley while still respecting its environment and special status.

Today the Locanda Risorgimento is closed so some hikers lunch at the Osteria Alpina, run by the Associazione Amici della Val Codera , which also promotes events in the valley. Instead we walk through the village to the sign for tracciolino, the less-traveled path to San Giorgio. It will take another two hours.

We cross a stone bridge spanning the torrente Codera, then a second bridge over another stream gushing down through rocks. We pause to marvel how they were built high over the cascading water.

We hike up and down through woods and lunch from our backpacks near a shepherd’s baita, a stone house with a splendid view of everything we passed in the morning. The path turns and we find ourselves on a long flat trail sculpted out of rock face with frigid water spraying down the overhang and sometimes dripping down our backs. In times past, it echoed with the blows of picaprede wielding pikes to break rock, calling to each other and coughing from the silicosis in their lungs. Now, except for the birds, there is silence.

At the sign for Cola, we take the path on the right and meet a group of German students, wearing helmets fitted with miners’ lights, heading for one of the many trails to study the unique geological conditions for minerals nearby.

We descend to San Giorgio, a group of stone houses scattered on an outcrop under Monte Provinaccio. From this placid hamlet of lovingly maintained “second” homes, we look back at Codera nestled into the mountain higher in the valley. We pass the Museo “I Noss Regoord” and cemetery with its two massi avelli, fifth and seventh century coffins, the shape of baths, carved into giant rock.

Then we begin an hour’s descent of switchbacks decorated with goat droppings. We view the lakes and Mount Legnone again. Traffic drones below. We follow goat bleats and CAI signs for a bridge, then for the parking lot.

A group of men sit under trees playing cards. A man with a long white beard and ruddy face nods and smiles. He could have leapt from a photograph in the museum.

“Hello, signora.” He hands me a brochure of upcoming activities.

“I’ll return in October for chestnuts.”

By train: See Trenitalia. Train from Milan to Lecco, then to Novate Mezzola, walk to Piandimezzo, about 2 kilometers.

Other routes: See a day-by-day itinerary in Italian at Waltellina.com.

From Codera walk to rifugio Brasca and enjoy its famous cooking or book a room and start the “Sentiero Roma” (Rome Trail), the most classic excursion in the central Alps and a myth among hikers.