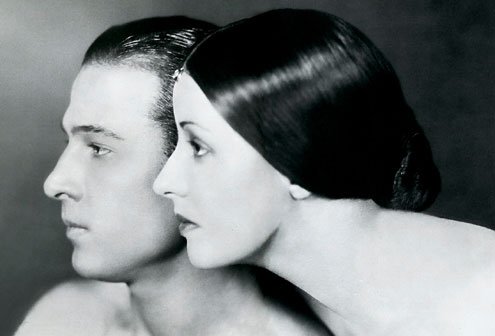 udolph Valentino was the film industry’s first bone fide sex symbol. While the wildly successful 1921 silent movie “The Four Horsemen of the Apocalypse” transformed the Puglia-born Valentino into a national sensation, the roots of his success and the darker undercurrents of his fame were a lifetime in the making.

Valentino’s apotheosis to silver screen icon and the sensational lengths he went to defend his masculinity owe much to his deeply ingrained notions of bella figura.

Valentino’s obsession with his looks and the “Latin lover” lore they ignited are salient features of both his legacy and Italian national character. Valentino had always taken special pains with his appearance. As a perfumed youth in Adriatic Taranto, he was forever primping and swaggering around piazzas and dancehalls to impress women. When he came to Hollywood, bella figura came with him.

In 1923, capitalizing on the Valentino brand, the star published “How You Can Keep Fit,” an exercise manual that swooned over an “ideal of athletic fitness” intended to “build up our bodies into the splendid examples of living sculpture we were intended to be.” Inside the book was the photo of a beautiful Olympian, impeccably-coiffed with rippling arms and a Plymouth Rock chest puffed up like a peacock. Here was Borghese marble in the flesh.

Valentino’s meticulous masculinity was manna for the ladies. His most popular movies exploited his buff physique and “exotic” features with sexually-charged, race-bending roles that steamed up Hollywood before the 1930 Hays Code introduced the concept of moral censorship.

The controversial rape scene in “The Sheik” says it all. Garbed in the Arabian outré of Sheik Ahmed Ben Hassan, Valentino swans around, strikes Greek poses, flexes his jacked-up muscles, and makes love with his slumberous eyes. All this during a brooding fit of kisses and manhandling doled out to a feisty victim seemingly begging for more.

“Here was an openly sexual icon designed to feed the most hidden fantasies of the cinema’s largely female audience,” Richard Kozarski wrote in The New York Times. “His films offered hints of violent sexuality and miscegenation meant to tantalize viewers.”

But male audiences and critics scoffed at the Valentino show. Those who copied his girl-getting style and slicked their hair back were soon mocked as “Vaselinos.” Most found him “effeminate” and were put off by his elaborate grooming and lusty romancing. In 1926, the Chicago Tribune struck the lowest blow. In an unsigned editorial, it blamed Valentino for the death of masculinity and dubbed him the “Pink Powder Puff” (“Do women like the type of ‘man’ who pats pink powder on his face in a public washroom and arranges his coiffure in a public elevator?”)

The public shaming of his masculinity, literal brutta figura, was an intolerable offense to Valentino. He responded with special flair, challenging the craven author to a boxing bout and hiring world heavyweight champion Jack Dempsey as his trainer.

The editorial’s author, John Herrick, didn’t show up on the roof of the Ambassador Hotel, where a special ring had been set up, but New York Evening Journal boxing writer Frank O’Neill did agree to fight Valentino. After losing, O’Neill wrote that the actor had a “punch like a mule’s kick.”

But the brio and sexual charisma Valentino exuded in the spotlight concealed a somber and tumultuous private life. He perpetually argued with studios over money and in 1922, annoyed at his $1,250 weekly salary (some women stars earned more), he staged an ostentatious one-man strike against the Famous Players Film Company.

Though he eventually signed with United Artists for an astounding $10,000 a week, Valentino, born in tiny, mountainous Castellaneta, was a spendthrift who squandered money on fine frivolities. His debt-ridden estate couldn’t pay for his August 1926 funeral.

And no one was unluckier in love than the “Latin lover” himself. His first marriage to actress Jean Acker was never consummated because she was a lesbian, and his divorce from second wife Natacha Rambova was so acrimonious that she was left only a dollar in his will.

They fared little better in happier times. When Valentino and Rambova returned to California after their Mexico wedding, Valentino was detained on bigamy charges. His divorce from Acker had not yet been finalized. Worse still, Famous Players refused to post bail. The humiliated couple later lived in separate New York apartments before they legally remarried in March 1923.

“I really believe I was happier when I slept on a park bench in Central Park than during all the years of the ‘perfect lover stuff,” Valentino would say later, reflecting on his days as a poor 18-year old immigrant.

His shocking death from a perforated ulcer in New York City at age 31 could have been avoided if Valentino had not ignored crippling abdominal pains while shooting and promoting what would be his last movie, “The Son of The Sheik.”

“Rudolph Valentino,” reflected Charlie Chaplain, “had an air of sadness.” In the end, his embrace of bella figura fooled no one.