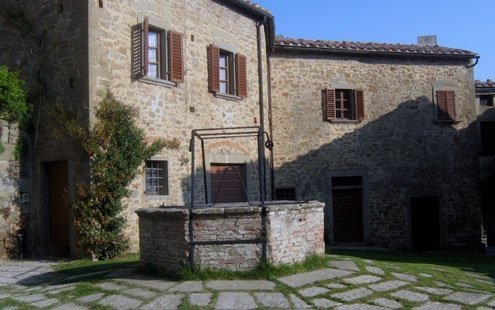 A pretty octagonal well lies next to the tower.
A

brochure for Gargonza bills this rural Tuscan hotel as “Your personal inner village.” The slogan might put off those who remember 1970s pop psychology and perplex those who don’t, but it shouldn’t.

Curling up the private, wooded road to the ancient walls of this renovated medieval village feels like entering the birthplace of fairy tales, a setting where Western folktales were spun before a blazing hearth and where my ancestors probably grew, played and toiled. Passing under Gargonza‘s thick, arched gate gave me, who was raised on Grimm, a resonant sense of homecoming, even though I grew up in a suburb of Southern California.

A castle watchtower stands guard over the fortified walls of the snail-shaped hamlet, forested hills, and the plain of the Val di Chiana below. In the town’s petite piazza, a pretty octagonal well lies next to the tower in front of the chapel. Symbol seekers such as Jung or Freud would have had a field day here. But so did my three small boys, who scampered over paving stones to explore what lane or lizard might lie behind each corner — never mind cars or motorbikes.

Gargonza is 100 kilometers south of Florence, smack between Siena and Arezzo. In 1303, as Guelfs warred with Ghibellines, the fortified castle sheltered the Florentine poet Dante Alighieri early into his exile.

I was invited to the hotel by Neri, the son of owner Count Roberto Guicciardini Corsi Salviati. The count is a descendant of powerful Florentine aristocrats who acquired the village as part of a vast agricultural estate in the 18th century.

The property once stretched from the hills to the plain, covering 33 sharecropping farms. It remained largely unchanged for 200 years, but in the late 1950s and 1960s, farmers and laborers abandoned the estate in search of better living conditions in the city. In the early 1970s, the count left a managerial career in Paris to resuscitate Gargonza, which had become a dilapidated ghost town.

Over 40 years, he painstakingly heaved this historic collection of rock and stone into step with the hedonic treadmill of modern times. At the same time, he set out a new course for his landowning family, which now own and run a series of rural hospitality ventures.

In the early days of “rehabilitation,” Gargonza offered rustic rentals to cultural nomads and other low budget travelers. Gradually, the Count shored up the homes one by one, using traditional methods and materials; he installed indoor plumbing and electricity throughout.

Gargonza now sleeps up to 100 in 31 apartments, suites and rooms, and is on the threshold of luxury. It’s so comfortable that striving for further stars could compromise its structural integrity.

Air conditioning can’t be added without pocking the village with heavy, ugly, exterior metal units, laments Neri. Fortunately (or unfortunately, depending on the guest), the need for cool air is limited by the effects of traditional peasant architecture: windows are small and walls thick. Rooms have no televisions, which would add unsightly antennae or satellite dishes. Handicapped accessibility is unrealistic because of brick and stone stairs, where even my three year olds took a few tumbles.

But by now, the olive press has been converted into a convention center, breakfast room, and leisure area resembling a private club (which does have a widescreen TV). The breakfast buffet is ample, and morning coffee options are worthy of an Italian bar. On the narrow pass leading to the village, guests can gaze through the great glass walls of an excellent, elegant restaurant specialized in Tuscan cuisine (my twins became hooked on handmade pici pasta with boar ragú), and a turquoise swimming overlooks the countryside. Gargonza now draws business conferences, weddings, reunions and B&B aficionados.

The lodgings feel like petite, comfortable country homes, and are named after previous residents. There’s Bracalino, a road worker, Pietrino, a farmer, Tullio, the watchman, Niccolina, the seamstress, and Lucia, the weaver, among others.

We stayed in “Santi,” where a game warden by that name once lived with his family. It was an attic apartment with exposed beams and slanted ceilings. The windows overlooked terracotta roofs and brick chimneys resembling miniature temples on pedestals. The furnishings were warmly Tuscan, with wrought iron, wood and warmly toned textiles. Our living room and kitchenette had an original working fireplace.

A dainty bouquet of kindling wrapped in newspaper burst into flames with the strike of a single match and melted away all my fire-making anxieties. The bedroom was ample enough to fit the three boys and myself, although the bathroom was cramped — another physical limit of the pre-existing structure.

Our babysitter was given a very pretty apartment with a sitting room and a bedroom, and glimpsing through other doors where linen was being changed, I caught sight of hand glazed tiles, terracotta floors and rippling cotton that ignited a desire to try out each one.

What I most enjoyed was the riot of landscapes born of the tussle between wild and groomed, elegant and rustic, old and modern.

Ferns and ivy sprang from thick walls, built or repaired in a patchwork of traditional styles. Doors leading to reception areas were large glass panes set in wrought iron frames, while others where arched, chunky, wooden affairs. The curtain rods in the Santi apartment curled nobly below a terracotta ceiling, whose uneven firing yielded burnt hues and immortalized a set of small paw prints. The closer one looked, the greater the variety of detail, like a complex ecosystem of memories. The count called this “sedimentation.”

Tall, dressed in tweed, with large black-rimmed glasses and grey hair, the count is eager to preserve the town’s historical memory. He has interviewed former Gargonza residents on their lives here before the exodus. He’s dedicated to reviving an extinct culture, with its own social structure, mores and habits. He wants to teach guests about rural life as it once was, when locals cultivated the soil and lived intimately with animals and fire.

Neri and his brother Tommaso, the count’s two youngest sons, are gradually taking the helm. “What we try to do, what we try to emphasize, is that this is not a hotel for one night,” says the 34-year-old Neri. “A new community may be formed each week, or may exist for a few days over the course of a conference. But this is a village, a place we’d like to think encourages bonding and interaction.”

And I think to myself, yes, Gargonza could well be the opposite of a getaway. With the right neighbors, it could be a return to what matters.

(Recommended for anyone who can handle stairs and footpaths. The swimming pool is not suited for small children. Price information on the website)