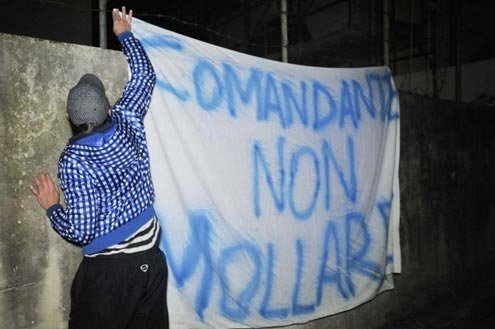 nder the dirty dermis of the ship-to-shore telephone call that has turned the Costa Concordia cruise ship disaster into a soap opera is an ethnic and regional wart as old as Italy and as ugly as the disaster itself.

In the hours after giant Concordia foolishly grazed Tuscan shores, cutting itself open and capsizing, its captain, Franco Schettino, somehow found himself not on the crippled ship but in a lifeboat. It was night. Power was out. The ship was listing badly. No one could stand up straight. Still, just how a captain who had given an “abandon ship” order was sitting on a lifeboat is rationally inexplicable, if not eyebrow raising.

As this scene unraveled, a Livorno-based coast guard commander named Gregorio De Falco, a no-nonsense veteran of the maritime trade, was desperately trying to make contact with Schettino. The fragmentary reports he’d received suggested nothing good.

When he finally got through to Schettino by mobile phone he was quickly able to establish two basic facts: that the cruise ship captain was in fact in a lifeboat; that the same captain, whether out of cowardice or shock or both, was not in command of his vessel, let alone the situation.

What followed was the extraordinary conversation — nay, monologue — that has made waves the world over. In essence, it consists of De Falco first demanding more information, then angrily giving instructions, using mockery and insult, and finally issuing browbeating threats, all ostensibly to get Schettino to go back to his ship.

In many ways, De Falco sounds like a righteously furious condominium owner telling a bad tenant, voce grossa, that he intends to file a grievance unless his demands are met. His tone is that of unadulterated hectoring. Perhaps entirely appropriate under the circumstances, but nonetheless based largely on assumption, because — and it’s worth remembering — De Falco was in Livorno, Schettino on the lifeboat.

This is where the situation turned subtler, and less savory, in the style of olden-day racial slights lately moderated by so-called political correctness.

I suspect De Falco knew immediately that Schettino was a fellow southerner (De Falco was born in Naples). Schettino’s inflection, soft and languorous, is typical of that city’s sprawl. Bluntly, De Falco sensed he was speaking not to a captain but to an inferior, as well as an incompetent. To what extent De Falco differentiated between inferiority in terms of the ship’s abandonment and regional provenance, or both at once, is not knowable and probably not clear-cut. Whether he would have spoken as harshly to a captain from Trieste, or needed to, is also an open question.

What is unmistakable is De Falco’s plainspoken rage, which gradually turned brutal enough to elevate him to a heroic stature he clearly didn’t seek. He is, to admirers, the symbol of the firm hand; a father dressing down a drug-addict son; a grandfather slapping a grandchild for larceny; a man of noble pedigree berating misbehaving hired help. Inadvertently perhaps, his tone is at the heart of the rhetoric that secessionist Northern League leader Umberto Bossi has aimed southward for 15 years, gaining the support of nearly 10 percent of the Italian electorate.

Does this make De Falco a bad or biased man? Not in the least; he, like Schettino, was under enormous stress. Anger often arises from the unconscious. What it does mean is that all is not always what it seems.

Why, the day after the audio recording went “viral,” hero and villain labels indelibly attached to each man, did Schiettino’s home town of Meta di Sorrento ensure that signs went up saying “Commandante Non Mollare,” “Hang Tough Captain”? Why did an anonymous letter arrive in the city hall of that town that read: “Il comandante Schettino è il solito terrone incapace,” in essence: “Captain Schettino is the usual incompetent ‘farmer,'” the least vulgar definition of “terrone,” a nigger-style north-vs.-south epithet. Why did town officials, while not denying their man’s actions looked bad, demand that the media not lynch him?

The answer is that the Italian media is north-propelled, with major many key papers and TV networks centered in north, the south by contrast seen as a hive of crime and caprice. Behold the mounds of uncollected Naples garbage.

And there’s the rub: No matter how many times the De Falco-Schettino exchange is played, and no matter how culpable the Costa captain may be, the timbre of De Falco’s demands that he come to his senses resembles those of a prince talking at the garbage man, two archetypes fulfilled: De Falco snarling, Schettino embarrassed, whipped, and nearly speechless.

Say what you will about bad captains and seafaring repairmen, but always beware underlying ambiguity. Both modernity and post-modernity are illusions of a sort; power-centered bias isn’t modified by the passage of time. It wasn’t long ago that Americans spoke to adult blacks — nay, African-Americans — and chose for whatever reason to call them “boy.” Often no malice was intended. Often the wording was the residual but enduring wreckage of an antediluvian time.

Yet the man-boy separation always cut deep, just as deep as the divide between Italy’s privileged north, the engine of commerce and wealth, and its long-dilapidated south, known instead (and tellingly) as Il Mezzogiorno, “high noon” or the “midday sun.” It’s a southern sun that many in Italy are convinced always goes down even before dark, leaving others to pick up the slack.