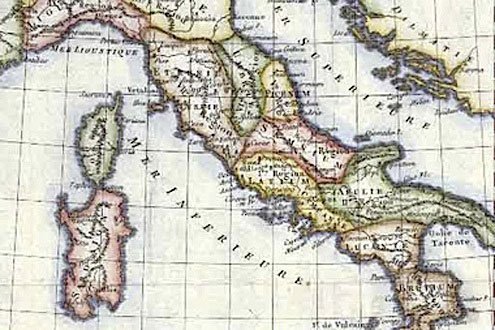 If you live in Italy, you need to learn to see the world approximately.
T

his is how Italy works. Let’s say you have a project. Let’s say you want to design a Web site, and that you’ve been introduced to a small design shop.

You make an appointment on a Monday a 4 p.m. You arrive promptly and buzz. No answer. Finally, a man comes to the door. He has a puzzled look. You explain the meeting. The man looks even more perplexed. “They’re not here,” he says finally.

But the appointment, you say. “They’re not here,” he adds. So you leave.

You return to your workplace and two hours later the phone rings. It is the head of the small business. “Excuse me,” he says excitedly, “I was at the bank. There was a line. Can you come now?”

You meet the boss (who has three mobile telephones) and his subaltern, a computer designer with a mopy complexion. The boss holds up one phone and says, “These. I hate them. I spend three hours a day on them. I have a skin condition on my ear.” His right ear is crimson red. One of the phones rings and he begins a conversation in which he gesticulates.

You begin talking instead to the subaltern. You explain your needs. When the boss gets off the phone, he joins a chat that goes on for 30-minutes after which the boss says, “We can definitely meet your needs.”

He’s effusive. You’re pleased. You show them Internet sites whose appearances delight them. They’ve never seen them before. “We can use these!” raves the boss.

All you ask of them, you say, is a relationship based on exactitude and a timetable. “We’re not like other companies,” says the boss. “We’re efficient.” The boss then recommends a meeting later that week, “after we’ve had time to look at this more carefully.”

You agree to send them further information and to speak the next day. This you do, sending them email messages.

The next day, you call but the boss is unavailable. He is unavailable the next day as well. A week passes and you haven’t heard a word. For some reason, you remember only the boss’ crimson ear and his phrase, “We efficient.” You do not hear from them again.

LET’S SAY you do an interview. The interview is with an important politician. You’ve known him for a while and he comes by your home on a Sunday afternoon to chat.

“Can we do the interview now?” you ask. He agrees.

You take out a tape recorder and he talks for almost an hour. “Are you satisfied?” he asks after. “I feel like with you I’m always clear, not stilted.” Not just satisfied, you say, but pleased. You take his picture.

When the interview appears in a publication you make arrangements to send complimentary copies to the press office of his party headquarters.

That evening, his sister calls. “What were you thinking?” she roars.

You’re startled. “He had all the copies confiscated,” she says. “He could not just let others read them.”

“What kind of a journalist are you?” she asks. “It contained damaging political assessments. He’s in a difficult moment. This is undermining. Did you think of that?”

But, I say, he agreed to the interview of his own volition; it contained opinions but no insults. It was honest.

“Honesty is not the point,” she says, “it’s damaging.”

“He thought you were a friend,” she adds. “He made comments that one would make to a friend, not a journalist.”

But I am a journalist, you explain. It was an interview.

“Well,” she replies, “at least you could have been ethical about it and shown him the interview before so that he could take out the indiscreet parts. That’s what any journalist here would have done. It’s normal.”

But you’re American journalist, you protest. You do not allow people to amend their remarks. It defeats candor.

She hangs up. You do not hear from the politician.

LET’S SAY you have a problem — that you need to collect outstanding funds from a public service agency, say — and you have friend who offers his help.

“Oh,” the friend says earnestly, “I know the head of that agency. You have nothing to worry about.”

This is a serious matter, you explain. The pledged funds are a lifeline. They have already been delayed two years.

“Oh,” says the friend, “the delay is normal. This is not a problem. These things happen. I’ve known the boss there for years, since we went to the islands on vacation with his wife. I know his children. My wife shops with his wife. This problem is the least of your worries.”

The problem is troubling, you say, because without the funds several people will lose their jobs.

Your friend dismisses this and promises to call the agency chief immediately. He will call you the next day, he says.

He doesn’t. It takes a week to track him down. “Oh yes, of course,” your friend says. “He’s expecting your call.” He gives you agency chief’s private number. “Don’t worry about anything,” he adds.

You call the agency chief but there’s no answer. You call again the next day, until a woman responds. She says she’s a secretary. She asks for your business. You explain. She asks you to wait a moment.

“I’m sorry,” she answers finally, “my boss doesn’t know the person who referred you to him. He’s sorry but he can’t take your call.”

You call your friend back but reach only his answering machine. You call again the next day, from a different number. “Oh,” he says, “he probably had a lapse. He’s just distracted. Not a problem. Trust me. These things happen. Don’t worry about anything. Give me a day to… “