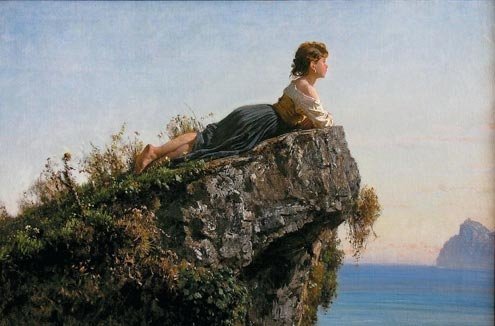 So why on the edge of the Mediterranean would I want to turn my eyes from that beautiful view and go back in those complicated rooms?
I

should explain right from the beginning that I still have not finished the essay I traveled all the way from New York to southern Italy to work on. There were several things I hadn’t taken into consideration: The difficulty of the subject matter I was dealing with; how damnably hard it is to write; and how beautifully distracting Italy can be.

I was given a bright two-floor apartment in a village south of Sorrento by a generous Danish couple that invited artists and writers to spend time in their beloved adopted town and create. The apartment looked directly out on a wide blue view of the sea. Flowers overflowed along my balcony. The smell made you want to fall in love. The place was voluptuous, heavy with possibility. You could sleep the entire time and still feel alive.

It was also incredibly loud — one of the loudest small towns I have ever been to. There is something about the acoustics in the streets of Italian cities and towns that are unlike in any other place. Voices are a hundred times louder than they should be. Tiny cars sound like trucks. Front doors closing are gunshots. Behind my apartment someone had twenty or so chickens and roosters wandering in a tiny yard. They crowed before dawn, during dawn, and after dawn. And at around six in the morning the little truck selling fruits and vegetables would park for a good long time below my building while a man yelled into his megaphone, Frutta! Verdura!, and other words I could not understand.

So I got up early and tried to write, did write in fact, although things came in strange bursts and fragments. I could not write in any linear fashion because I was fearful of where things would go. I was writing about my father’s death a year and a half earlier and the process of clearing out the house I had grown up in. The task had been monumental. My brother, sister, and I spent a summer attacking the place in stunned crisis mode. Our mother was not well and had been moved to Boston. We had to sell the house quickly. We were left to decide what to do with several generations’ worth of stuff. When people came to the house and saw what we were dealing with they looked like they wanted to cry for us. My father had not been able to throw anything out, had been emotionally unable to part with things from the past. It seemed all our lives we had known this day would be coming and it would be hard and now here it was, here we were.

My father had broken his hip right before Christmas of 2008 and, after four days denying the unbearable pain he was in, had gone into the hospital for a hip replacement. At the beginning of 2009, less than two weeks later, through a series of circumstances and a grave error, he was dead. The day we had him taken off life support was the coldest day I can remember in my life. After it was all done, we left the hospital and walked to the car under a flat gray sky in Pittsburgh. We went home, ordered a pizza, sat around, and maybe watched television. After someone dies no one knows what to do with themselves.

One of the last things I had done for him when he was in pain at home, before he finally consented to go to the hospital, was to go down to the liquor store and buy him some booze. He had run out of vodka. He was a heavy drinker and badly needed it. He sent me to the store he always went to, in a ghetto part of town. He almost always bought rotgut alcohol. He told me exactly what kind of vodka to get-a very clear assignment. Standing there in the store, I thought, Why don’t I buy him a really great brand, something special? But I was afraid he would think that I somehow believed he wasn’t going to make it. I wanted things to seem normal, ridiculously normal. So I got him the shitty brand he asked for. These are the things you think of later and kick yourself for, even though there are substantially more important things for which to kick yourself.

There in Italy, I kept listening to Bob Dylan’s bootleg song “Dreamin’ of You.” The line “The shadowy past/is so vague and so vast” went on a loop through my mind. Bob, so right again. At another point in the song he sings, “Some things last longer than you think they will/And you never ever know why.” This was my problem. I wanted to penetrate the past; and I knew that even if I did, there would be things I would never understand and that it would be a very long time before the urge to understand, the desire to redeem and make peace with, would go away. I wanted to understand my father’s demons, unhappinesses, the various bedeviling aspects of his personality, the reasons he had cut himself off from my mother. He was a sweet, generous, spectacularly gifted man who was haunted. But often this haunting is not for a daughter to comprehend, although she will try.

Before going to Italy I had not really contemplated the fact that, being on the Mediterranean, the weather would most likely be very sunny and bright. Which was something that I love, that I was craving all winter in upstate New York. But once I was there, the sun felt too bright, too clear, daring me to see things clearly, not vaguely, as I am wont to do. And the entire problem with writing about my father and the house and the whole experience was that it was very… vague. Vague and vast. There were dark things to get through, musty curtains to push aside and closets to look in and corners to clear out.

Like in my father’s room, which over the decades had become almost impassable. There were stacks of books and papers, artwork his beloved children had made, boxes of letters we and others had written him throughout our lives. Photographs of his parents and grandparents and great-grandparents, his brothers and aunts and uncles. Broken toys he had intended to fix. Financial records he was afraid to part with. And then piles of meaningless, arbitrary things that drove you mad. Everything had to be carefully gone through because there were treasures within: his writings (he had been a writer, of fiction and poetry and scholarly works); recordings of his singing (he had been a classical and big-band singer); flight logs and war relics (he had been a fighter pilot in World War II). On the last night I ever spent in that house I opened a suitcase stashed at the back of a closet, something I nearly overlooked and could have easily left to be thrown out, and found his Purple Heart.

This is why you had to be careful, careful in all things, especially in remembering and writing and saving what ought to be saved.

So why on the edge of the Mediterranean would I want to turn my eyes from that beautiful view and go back into those complicated rooms? I tried, and I did go in and out of the rooms of my old house, and the rooms of that godawful hospital, but I also took walks and sat in olive groves. I wandered through the town at dusk, content and alone. I drank coffee and procrastinated. I went out gallivanting with the Danish couple staying in the apartment next door, drank with them, took a lovely day trip to some ruins. On Sunday I watched all the townspeople going to their family dinners — grandparents, parents, kids. Loud, happy-looking people who had stuck together in this tiny town. I wanted all that they had, or at least what I imagined they had.

On my last night there was a dinner at a restaurant with the other artists who were there, to send me off. We drank a great deal — wine, grappa, limoncello. I wanted to make a toast to my father, since he was really the one who had brought me there, and I should have, but I was lost in talk of other things. And I was busy eating — mozzarella di bufala, spaghetti alla vongole, melanzane alla griglia. No one asked me if I had finished the piece I’d come to write. Somehow I had known I wouldn’t finish it during that week, that it would take me a long time, and that it most likely wouldn’t be what I wanted it to be. Because the truth is often behind you or ahead of you and rarely right in your grasp. But right then, sated, slightly drunk, and looking out on an open sea, the fact that I’d come and at least tried seemed as good a thing as any. It was a good start, for sure. But finishing is another matter. I still dream about clearing out the house, closing the door for the very last time. Everyone knows the end is one of the hardest things to get right.