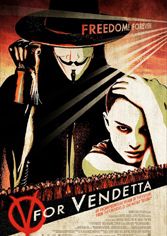 A futuristic Grand Guignol with an Orwellian appetite (based on Alan Moore’s celebrated comic), “V” deliciously mates “Brazil,” “Phantom of the Opera,” and “The Count of Monte Cristo.” It’s the year 2020. The former United States is locked in civil war and Britain controlled by a latter day Oswald Mosely (anti-Gay, anti-Muslim, and so on) who ascended to dictatorial power through state attacks blamed on godless terrorists. Cometh “V,” a Guy Fawkes-masked avenger, product of a biological experiment gone wrong. As he picks off the totalitarians one by one, a police inspector (once a dutiful party member) begins discovering how the fascists got their leg up.

Director John McTiegue’s film would be little than overheated post-9/11 opportunism — a colorful, “Take this, George Bush!” screed about government and media abuses — were its retro-future panache not so generous and subversively elegant (for that, thank Alan and Larry Wachowski, whose conspiratorial vision this represents). The players (Natalie Portman, Stephen Rae, John Hurt, Hugo Weaving as “V”) are stick figures in a dreamscape based largely on idealistic, anti-reactionary themes that hark back to 1968. No surprise the movie ends with the Rolling Stones’ “Street Fighting Man.”