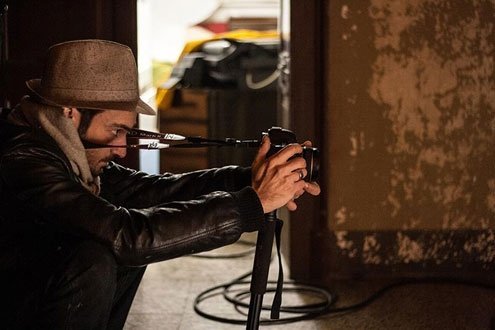 A member of MACAO works on setting up film set.
T

he young man in front of Via Molise no. 61 in Milan is punching in a code on the keypad of his iPhone. If it’s correct, an automated system will buzz him into the building and onto the spacious floor of a once-abandoned meat market that has been haphazardly transformed into a thriving if unauthorized — some would say illegal — artists collective called MACAO.

“The name sounded good and easy to remember,” says Alessandro Lariccia, a 42-year-old editor and filmmaker, as well as an involved member of the collective. Several throughout Italy have gotten their starts through mass sit-ins. “We wanted an acronym similar to MOMA or MOCA or LACMA. The difference is that it doesn’t stand for anything, or maybe it stands for everything. We actually launched a campaign asking people to give the acronym a specific meaning. People could come up with whatever they wanted. So MACAO now stands for whatever anyone wants it to.”

MACAO, says its website, “is a network of people who throughout Italy fight for the idea that culture is part of the common good.”

Inside, the art deco floor and the high ceilings are reminiscent of a century gone by. To the left, however, is a very 21st-century bar. A handwritten sign points left for wine and right for beer. Not much else is on the menu. But partying isn’t at MACAO’s core.

On May 5, 2012, Italian grassroots activists occupied (they prefer the verb re-appropriate) Torre Galfa, an unused, 31-story skyscraper near Milan’s central station. They were forced to evacuate the building 10 days later. The idea behind the short-lived takeover, publicized through an enigmatic campaign of viral videos, was “to create a public space for the arts and fill the void left by municipal institutions using vacant and unused buildings.” Dario Fo, a longtime activist who won the 1997 Nobel Prize in literature, lent his support to the collective during a peaceful sit down protest.

Eighteen months and two occupations later (the second involved another short-lived “re-appropriation” involving yet another famously vacant building, Palazzo Citterio), MACAO finally seems to have found a workable spot in the former slaughterhouse. So far, the Via Molise space has played host to the popular band Afterhours and crooner Vinicio Capossela. Romanian graffiti artist Dan Perjovschi, whose works have been displayed at MOMA and London’s Tate Gallery, has loaned his talent to several otherwise blank walls. A number of Milan intellectuals and celebrities have made appearances, either to lend support or to check out the space, among them actor Lella Costa, the comedic threesome Aldo, Giovanni & Giacomo, and mainstream TV personality Fabio Volo.

Milan authorities recently considered forcibly evacuating the Via Molise collective to make room for a homeless shelter, but changed its mind. The two sides remain locked in a quiet but tense standoff.

Theater workshops, concerts, book festivals, cultural symposiums and Milonga dance-fests are now part of the center’s daily and weekly norm. “We charge a symbolic entry fee of €5, so we can pay the instructor or the lecturer,” says Fausto Pisani, a MACAO video maker whose day job is market researcher. “That also helps pay for heating and supplies. Mostly, though, MACAO supports itself through volunteer work. And yes, the city pays for water and electricity.”

Pisani is a young-looking 60, a rare middle-aged figure among activists who generally range in age between 35 and 45. “We decide everything during a weekly meeting on Tuesday nights,” he says. “Everyone can join, by the way. Also, we don’t decide by majority, but through consensus. That means we all need to agree. It’s a somewhat slower process, but believe it or not we get things done.”

As we walk along the balustrade that runs around the first floor, a young man in a hoodie rolls around on a wheeled office chair, punches in a keypad code, and disappears into a protected room.

Nearby, young actor and writer Diego Giannettoni, his blonde locks in a beanie, diligently mops the hardwood floor of MACAO’s theater lab. I ask him if he teaches acting. “I share what I know is a better way to describe what I do here,” he replies.

These days, most of the excitement is focused on the opening of MACAO’s movie theater, set for December 14. Plush dark red chairs are stacked against the black painted walls of a small room. “We’ll showcase independent movies,” says Lariccia. “The kind that are currently cut out of [mainstream] distribution. We’ll network similar collectives such as the ones at Teatro Valle in Rome, Palazzo del Sale in Venice, and Kinodromo in Bologna to create a demand for movies that are currently left out of the mainstream economy.”

The theater will open with its own production, titled “Open,” a collective work that received a major boost from renowned Italian cinematographer Luca Bigazzi. But Lariccia is less interested in celebrity than possibilities. “You know what is really great?” he asks rhetorically. “That every one can send in their movies for showcasing during the opening weekend. By everyone I mean everyone. Now, that’s revolutionary.”