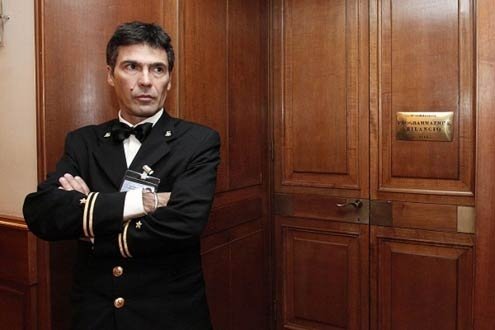 uxtaposition means how different things look in relation to each other. But put a hex on the word and the same shadow includes any number of random events. Let’s start with a neighborhood movie theater, mine, that went belly-up unannounced after its annual summer break. An absolutely mundane event — if only Rome didn’t habitually put stealth ahead of candor, opening the Latin world’s Pandora’s Box.

The shutdown didn’t go over well with neighborhood’s elderly population, which saw the half-century-old theater as a local fixture and paused to stare at the unused marquee as if its whiteout caused phantom pain. The vacancy disoriented them until they stopping caring, an across-the-board psychic surrender on which the city counts.

Rome is the short-cut capital of the galaxy. It cheats, conceals and dares its residents to get excited, knowing the excitement won’t last, which it rarely does. The dare is acted out relentlessly, profanely, in all things and with all people, cheerful and pitiless, making the pagan city’s early embrace of Christian charity all the more understandable. Christianity mitigated earlier follies by arranging for public remorse and private forgiveness.

The government, like the theater, is also closing, though the folding was long pre-announced. The prime minister, an unelected economist, will be soon be uprooted and challenged by a troika that includes (maybe) an aging and disparaged bogeyman, a foul-tempered standup comedian, and a social democrat — the favorite — who began his unspectacular career as a Communist. It’s a Fellini triptych ripened for maximum sound.

Less apparent is how the theater’s closing is tied to the unelected economist, Mario Monti, who in his eagerness to make corruptly creative Italy better resemble spendthrift northern Europe, and to mitigate its debt, wove panic into those who might invest in the country to keep its unsteady but crucial innards vibrant.

Italy has long been an anathema, if not terrifying, to those who would pay into it. But now it scares even insiders wary of rising taxes and more reluctant than ever to expose themselves to a government that gropes for their legal and illegal cash.

Mortgages are off 40 percent, a tenth of the people control 50 percent of all wealth, and more than a third of the country’s youth is unemployed. Coming national elections will seed the field with populists determined to reap and ride a groundswell of resentment against all things austere and tax-oriented, so much so that the Berlin-driven European Union wants Monti to run and may yet get its wish. At heart, however, the Roman political song — olden, brittle, broken — repeats the same lyrics.

To some, the prospect of surrendering the steadying academic hand of economist Mario Monti to a rawhide politician conjures up the prospect of an Italy re-trapped in partisan quagmire and once again afoul of “responsible” Europe. Wasn’t it Monti who rescued the Italian economy (and Italian banks) from its December 2011 precipice? Isn’t he the white knight, the man of the hour, the cover boy for Western media eager for an Italian valedictorian? Didn’t Monti turn down his prime minister’s salary to set an example for the country’s managerial class?

But Italian juxtaposition is fickle.

The Rome office of Italy’s largest bank is located only a few blocks from the opulent parliament building and the offices of the prime minister, gorgeous territory in the center of the city. I arrive there with a friend to meet an executive vice president, an elegant, workout-sculpted man proud of his command of English and his non-Italian connections.

But to get to him we must first check in with three assistants, be escorted to an elevator by a fourth, and be met on the second floor by a fifth, this one an usher, a Rome staple, a man (few are the women) who traditionally walks visitors from elevator to waiting room, where the waiting sloshes from minutes into half-hour chunks. Finally, the same man — the usciere — politely retrieves the visitors and escorts them to the appropriate office.

For decades, no interview, no meeting, no encounter, lacked an usher’s intermediary company. But haven’t times changed? Isn’t Monti’s Italy leaner, if not slightly meaner? If jobs have been lost, small businesses made to struggle, and theaters deprived of movies, hasn’t there been an equal and opposite up-tick? Aren’t the troubled banks at the center of the mess equally meaner and leaner?

Not from the usher’s perspective: He still has work, the kind that pays him to escort and defer. I see him again on the way out. He flashes a fawning, ever-gleaming Rome smile, after which he returns to his sentinel’s spot behind a corridor desk, guardian of a floor in a city that pretends to want to change but only in passing, its upper echelons as boastfully entrenched as ever, the only the substantive urban change reserved for the shutting down of a movie theater, and in front of it the growth of an abundant clump of weeds, rank plants that Rome exalts and lets flower better than any capital on earth.