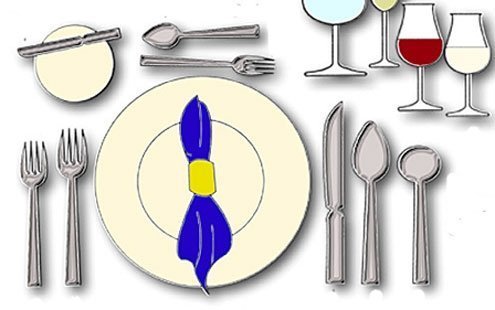 American and Europe-style etiquette differs when it comes to fork and hand usage.
T

he dinner party included me (the American), a lovely German woman, a French couple and two Portuguese men, one of them the host of the soirée. We sat beneath colored lights on a small patio, the warm Lisbon air gradually inviting mosquitoes that warned us to move inside.

Wine glasses were filled and refilled while conversation flowed seamlessly from one subject to the next. As with most European discussions, “the crisis” topped the agenda, along with recent French political upheaval (which the French couple felt compelled to explain, futilely I might add.) I gladly joined in, answering questions about Obama, the United States, and my experiences as a veteran American traveler.

Until the food came.

It was then, while looking longingly at my fresh grilled sea bass, roasted potatoes and sautéed Romanesco broccoli, that I was forced to remove myself from the conversation. I had bigger fish to fry, so to speak.

As the only American at a table full of Europeans, I was determined to adjust my American style of table etiquette to fit the habits of my newly acquired continental friends. In fact, I’d been practicing making the etiquette break for months.

And it was damn hard.

Suddenly, I had to eat with my left hand, which I’ve always insisted exists only for show (and to lean on from time to time).

Differences in dining etiquette never had much of an impact on me until I briefly dated a German man. I noticed he’d leave his hand on the table as we ate and wondered to myself how a well-educated adult could have such poor table manners. It wasn’t that important and who was I to play teacher?

He was much more opinionated on the subject. He asked me if my parents had ever taken me to nice restaurants while I was growing up. “Of course they did,” I replied. “It was very important to them that their children learn manners.”

“Then why do you eat the way you do? Why do you put your hands on your lap? In Germany, we always say that the Americans do that because they are hiding a gun.”

I was stunned. I wished I did have a gun, or nearly.

“You’re the barbarian,” I snapped back. “Your hands are on the table so we can see you won’t stab us with your knife.”

Later, we had a good laugh over childhood training. I explained how I was constantly reminded to get my hands off of the table; to rest my left hand (I’m right handed) gently on my lap, which held my napkin, and to move my fork from my left to right hand while cutting my meat or buttering my bread. If my left hand accidentally came to rest on the table, my mother was ready: “We are not barbarians, get your hands off the table.”

My polite and conscientious parents made sure their children could go anywhere from high-class restaurants to Broadway musicals. They prided themselves in our manners and that we could fit into any situation. Or should I say fit in into any American situation.

Their own manners came from parents who had learned them from their parents, and so on, and my mother’s quip about barbarians wasn’t a joke. The American style was indeed developed to break free of the ravenous tendencies of centuries past.

Yet here I was in Europe, a place I know well, feeling like a bit of a barbarian, picking at the fish while struggling to hold the fork in my left hand. How I longed to use my right hand, and for a moment I slipped up. I switched hands and let my knife rest in my left while my wonderfully dexterous right hand did what it’s done with great skill for 42 years — eat!

Then came another, even worse slip up. After resting my utensils on my plate to sip wine, I absently-mindedly picked up my fork with my right hand and rested my left hand on my lap. Had anyone noticed? Would they duck and cover in case I went on a shooting rampage with my hidden weapon as we weaponized Americans do while eating our dinner? But nobody noticed and I recovered quickly. I managed not only to hide my gun (again), but also slip myself back into the conversation.

One thing about “us” barbarians: we’re quick, and extremely clever.