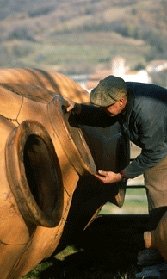 o get ahead in the wine game, sometimes the best place to look for imaginative new ideas is not forward but back.

There’s much to be learned from our ancestors, and this is particularly true in winemaking. Every so often the back-to-the-future approach is the stuff of marketing and palate-pleasing genius. Take for example Del Dotto Vineyards in California. To creatively outpace his Napa neighbors, who also produce winning Cabernet Sauvignons, Dave Del Dotto purchased four antique Tuscan amphorae and set about fermenting his first commercial release of an amphora-fermented wine in 2005. With a combined price tag of about $60,000, these time worn terracotta containers were reported to be 300 years old and stood four-feet tall and six feet wide. The estate’s amphorae wines — holding approximately two tons each — now sell for $60-$100 a bottle.

Where did Del Dotto get the idea?

He studied the ancient ways that wine was made and read about the innovative Italian winemaker Josko Gravner. The determined Gravner has been making highly personal wines in the Friuli-Venezia Giulia region of northeastern Italy for 30 years. In Italy, his amphorae wine sells for less than half of what similar wine costs in California.

An experimenter before it was chic, Josko began bucking tradition earlier in his career when he stopped making whites using temperature-controlled steel tanks. Instead, he employed small barrels of French oak, a tradition more commonly seen with red wines. The result was an unusually colorful white with an aromatic nose that included herbs such thyme and mint that complimented the smooth fruit flavors of golden apples. The use of smaller casks gave a vanilla tone to his vintages.

Known for making untraditional wines in a country that is ruled by tradition, Gravner’s early risk-taking was only beginning. Looking back a thousand or more years to the ancient Greeks and Romans, he began tinkering with amphorae in 1997 and in 2001 produced his first marketable amphorae vintage using the time-honored techniques preferred by our ancestors.

Using massive 3,500-liter terracotta amphorae lined with beeswax and buried in the ground up to their necks, Gravner fermented his wines in terracotta giare for six to seven months, leaving the wine to macerate with the skins, seeds and pulp. Later, he transferred them into large oak botte. The result is an enchanting mix of old and new that is not to be missed.

But breaking new ground with old techniques is always a challenge and Italy’s winemaking primativists have a lot at stake financially. Making deeply personal vintages is risky in the early stages. Few try it unless they have a bit of cowboy (or should I say Da Vinci) spirit in their souls. Getting these noteworthy experiments into the public’s hands can be a pricey proposition taking up valuable space and grapes until perfection is reached.

Here are some worth trying:

This is the second of Gravner’s Anfora ribollas. The grapes are macerated in amphorae until April, then pressed with an old manual press before spending 34-37 months in wooden barrels, during which the wine is racked (or siphoned) only four times. The wine then spends another six months in bottles before release.

An interesting and unusual wine, on the palate it has the structure of a red instead of a lighter white. It has a wonderful floral, fruity taste and nose and a long honeyed finish with interesting flavors of butterscotch.

A small-production wine made from the Tocai grape fermented in enormous terracotta containers called dolia, the grapes are gravity-fed directly into awaiting open-air amphorae, then sealed after 10 days and left for six months. The skins are then removed and the clear wine is returned to the amphora and left to age for eight months with no added sulfites or filtration. This is a spicy Tocai with wildflower and herb highlights on the nose.

A selection of single cru ripe Nerello Mascalese grapes. The grape bunches are de-stemmed and pressed the old-fashioned way (with feet) into wooden containers before going into the terracotta for fermentation. After alcoholic fermentation, the terracotta containers are sealed with the integral grape mass inside until after malolactic fermentation (the conversion between sharp malic to softer lactic acid), then pressed, placing the liquid back into the terracotta containers for approximately 15 months before bottling. First impression is a delicate yet earthy blend of sweet and intense red fruit with a powerful nose and subtle minerality.