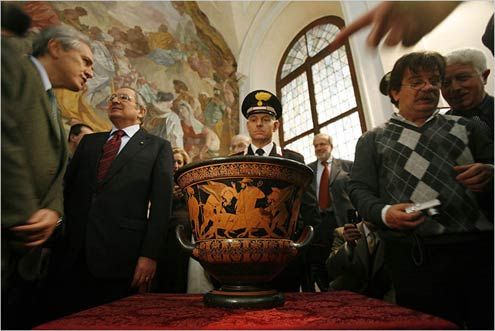 First the urn. Sicily, once Greek, hosted colonies and treasures. When Greece fell to Rome enemy antiquities lapsed into history’s cold storage. After World War II, raiders and collectors took advantage of laxity and disposable dollars to plunder the crannies, particularly those in the south and Sicily. Among the fairest vases, or kraters, landed illicitly in the best American museums. Cometh Italian indignation, and litigation: Decades later the loot, part of it at least, has returned “home.”

Italian Attorney General Oscar Fiumara couldn’t resist the sardonic: “It gives me great pleasure to celebrate something positive,” he said. Culture minister and former Rome Mayor Francesco Rutelli said recovering the urn put Italy in the forefront of “the battle to fight looted antiquities.” It has certainly one-upped Greece, which has so far been unable to pry Lord Elgin’s Parthenon mischief from the British Museum. More artifacts will head Italy’s way in years to come.

Though Italy made an official fuss (the urn was molded into a Friday night TV star) there was no discernable public fuss. The urn failed to unseat news provided by former Prime Minister Silvio Berlusconi that he had a hot-list of sexual liaisons within Rai, state TV. Why such a list? To “defend” himself from allegations that he’d used a network ally to try to place the starlet lovers of swing-vote politicians in TV movies. It’s on the dreamlike side that the prosecutor in the case is based in Naples, which smells.

The Naples garbage crisis has been blamed on everything and everyone except perhaps on Berlusconi. The Camorra, Naples’ organized crime organization, ultimately won the blame game — waste management is a billion euro industry. But blame is backhanded reassurance. It asserts a status quo, albeit a negative one. The Camorra factor removed the Naples story from front pages. Mention organized crime and political duplicity in Italy and you eventually generate acquiescence. Mention it outside Italy and you provokes pseudo-outrage and cliché. White-collar crime beats public atrocity and is incorporated easily into national caricature.

Yet the garbage story is compelling for other reasons. Naples, observes the BBC’s David Willey, an Italian veteran, “used to be one of the great capitals of the Mediterranean.” True, Naples shined in the Bourbon 18th century. It had a Spanish king and Austrian manners. But royalty aside, it was Dickensian. “It is the negation of God erected to a system of government,” Gladstone wrote after a 1850 visit.

The situation improved only marginally after Italian unification a decade later. The late 19th century Neapolitan Diaspora — mostly to North and South America — saw five million residents, most illiterate, opt out of systematic poverty, filth, and gang murders. The cruel reception the emigrants met reflected what they left behind. “There is not one in a thousand from Naples or Sicily that is not a burden on America,” Stanford President David Starr Jordan wrote before World War I, calling Neapolitans “biologically incapable.” Civil rights activist Booker T. Washington said slum-dwelling blacks in New Orleans, Philadelphia or New York City were better off than the “corresponding classes in Naples and other Italian cities.” That was 1911.

What little urn-sheen Naples possessed had vanished by World War II, when retreating Fascists and Nazis surrendered the city to its emboldened mobs. Unlike Rome, Naples was in the thick of the fight. Liberation, a relative term at best, revealed a city that American and British soldiers fantastically compared to Calcutta. Brothels abounded. All was for sale and re-sale. Postwar civil authority was an offshoot of criminal rule.

In 1952, the Italian writer Curzio Malaparte (an opportunist who supported both fascism and communism) wrote a novel called “La Pelle,” The Skin. It transformed “liberated” 1943 Naples — “an inferno of degradation” — into grotesque metaphor for the decline of the West. Malaparte’s fictional foil is U.S. Army staff sergeant Jack “Jimmy” Hamilton, who is troubled by a city he sees as “governed not by reason and conscience, but by obscure subterranean forces.”

Hamilton’s bewilderment gives narrator Malaparte a rhetorical opening. “You could not have chosen a more dangerous place than Naples for a landing in Europe,” he tells Hamilton. “Your tanks risk being swallowed up in the black slime of antiquity, as in a quicksand. If you had landed in Belgium, Holland, Denmark, or even France, your scientific spirit, your technical knowledge, your vast wealth of material resources might have given you victory not only over the German Army, but over the very spirit of Europe — the other Europe of which Naples is the mysterious image, the naked ghost. But here in Naples your tanks, your guns, your machines provoke a smile. They are scrap-iron …”