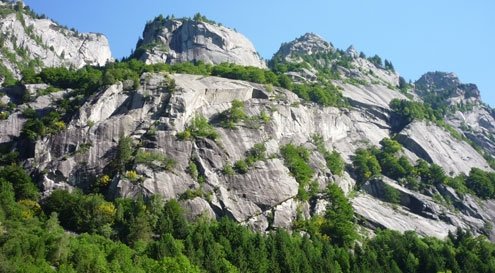 Val di Melo is in Rhaetian Alps on the Swiss border. Photo by Andrea Smith.
I

’m not the first to say that Val di Mello reminds me of Yosemite. Why? Perhaps it’s the glacier-scraped, granite mountainsides with narrow waterfalls dropping hundreds of meters before forming torrents that join the river on the valley floor. Or maybe it’s the climbers weighed down with ropes and clamps, hurrying along the wide, almost flat trail on their way to tackle vertical rock faces with names such as Precipizio degli asteroidi, Precipice of the Asteroids, and Trapezio d’argento, Silver Trapeze. Like Yosemite, the valley welcomes children and campers, but it also offers wild areas with difficult treks where only experienced hikers should venture.

Val di Mello is a small side valley without roads at the end of Val Masino, which runs north from the Valtellina valley. It’s in the Rhaetian Alps (Alpe Retiche), a range that Italy shares with southeast Switzerland.

From Milan, my husband and I drive north on state road 36 to Colico where, following signs for Sondrio, we turn right into the Valtellina. At Ardenno, seven kilometers after Morbegno, we go left at signs for Val Masino. We take road 404 for 16 kilometers to San Martino (923 meters) at the end of the valley. There’s pay parking in town, but we turn right and drive over the bridge to a free lot near the sports centre. The drive takes two hours.

We walk back across the bridge and turn right into an asphalted road. The Masino River is on our right. The road becomes a trail. The fast-flowing river changes into a roaring torrent of clear water gushing over boulders. Leaving the houses behind, we hike in leafy woods. Immediately, we spot one of nature’s June gifts — wild strawberries. The fragrance teases as I slip a tiny berry into my mouth. Its sweet tang explodes on my tongue.

After 15 minutes, further up the trail, a green bridge appears. Soon afterwards, the path comes out on a road. The asphalt turns to cobblestones. We pass stone houses and soon reach the “Gatto Rosso” (1,061 meters) trattoria, which offers rich local dishes including some of my favorites — pizzoccheri, buckwheat tagliatelle with butter, cheese, cabbage and potato; crespelle, buckwheat crepes with bitto cheese; sciatt, deep-fried, breaded cheese balls; and polenta taragna with grilled meats.

We then take to the Val di Mello trail, an easy, two-hour walk on the valley floor to Rasega (1,148 meters), our destination. We keep the rushing water on our right. At one point the trail is washed out for 30 meters so we clamber over rocks to avoid wading through knee-high water. After this stretch, the trail leads away from the streams and through Swiss-like meadows to Cascina Piana.

Early morning mountaineers are already halfway up a sunlit rock face. Above them, craggy peaks await. Farmers cut alfalfa with scythes. Women rake. Campers sit at tables outside the agriturismo, Alpe Val di Mello, and the rifugio, Luna Nascente. A climber sits on top of a domed outcrop watching her partner rappel down.

The trees now are dark green coniferous firs. Here and there, dramatic, long yellow sprays hang from poisonous laburnum trees. The trail returns to the river, limpid and transparent. Light plays on water rippling over stones.

On the left a sign marks a steep path for Valle di Zocca, the Rifugio Allievi (2,385 meters) and Sentiero Roma, a high Alps, five-day trail from Val Codera to Val Masino for hardy trekkers.

Later, we pass the entrance to Val Torrone with its peaks of Pizzo Torrone, Torrone’s Needle and Cleopatra’s Needle, named after London’s Egyptian obelisk. These peaks jut above 2,500 meters where glaciers never reached.

Further on, a sign marks a deviation on the left, a short climb that leads to a sturdy bridge over a rushing, foaming stream. Another arrow points straight ahead to the scorciatoia (shortcut) with rickety logs over tumbling water. Both lead to Rasega, a hamlet of stone baite (cottages). Its rifugio is the last place in the valley where you can eat and sleep. Ahead, the trail ascends beside a waterfall and through pines, once cut for Rasega’s now defunct sawmill. Icy, massive Monte Disgrazia (3,678 meters) looms over the end of the valley. Legend has it a beggar once stopped for alms among its shepherds and was turned away, “disgracing” the mountain.

We stop in the meadows at Rasega, cross over some streams, and picnic on an island. We sit on rocks in a sea of yellow, mauve and white flowers. I dabble my feet in water so cold it stings.

Later, we take the same trail back to a sign for “Sentiero Life” and cross a bridge. The narrower footpath on this side follows the river and across fields. Near a farmhouse, Ca’ du Schiuma, tall grass grows around an abandoned wagon. Some years earlier, we had met an old man working alone here. Now a horse is tied in the shade. Dogs and a young cowhand in a baseball cap and jeans move a herd to new pasture.

Val di Mello is named after the village of Mello on the Costiera dei Cech (Cech coast) in Valtellina. For centuries, the inhabitants drove their cows some 20 kilometers to summer graze in the valley and surrounding mountain meadows. In 1862, just six years before naturalist and conservationist John Muir first set foot in Yosemite, the English mountaineer Edward Kennedy trekked through Val di Mello. Robbed of everything, he described his experience with the wild and dirty “natives” as being one of the most dangerous on his climb of Monte Disgrazia.

Today, as we cross the bridge near the trattoria “Gatto Rosso” (mobile: +39.0342.372.6006), families play by the water. The parking lot is full. A 1973 government decree protects Val di Mello as “an area of noted public and environmental interest.” For me, the valley is enchanting.