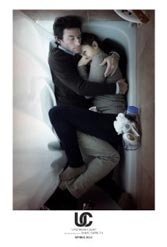 Impressionist wizard Shaun Carruth has produced a fantasy suitable to any number of supernatural tastes. It could be Green Movement science fiction, a film-length paranoid schizophrenia episode, or even a diabolical 21st-century imagining mind control. More likely it’s all three and more, with Thoreau’s “Walden Pond” behaving as a magnet.

In a stunning opening, video producer Kris (Amy Seimetz) is kidnapped and injected with a hypnotizing worm the opening scenes show collected and harvested. She’s scammed, sickened, and wakes to an overturned life. Enter Jeff (Carruth), who falls hard for weakened Chris but begins noticing their memories overlap. He, like Chris, is maladjusted. They crave each other, and answers. Few words are spoken, except from occasional passages from “Walden Pond,” which Chris was forced to read by her faceless abductor. In the backdrop is a mysterious pig farmer (a David Lynch figure) who has a strange way of tending to his animals and appears to count Chris among many worm-infected “acolytes.” Again, nary a word is spoken.

In all this, characters aren’t characters but outcroppings of a limbic tsunami driven by ambient sounds and hallucinogenic paranoia, as if to channel Thoreau through Timothy Leary to suggest a horror-pastoral about the perils of corrupting the natural order.

The problem with falling back on visual and aural transcendence — read technique — as narrative is how easily it first flirts, then falls in love with itself (Terrence Malick was similarly derailed in “Tree of Life.”) As a parable about human dreams and basic fears, Carruth’s video painting is haunting, even beautiful. But that lasts only until the time comes to dot a few “i’s,” which is when the built-up awe loses at least some of its enchantment, not unlike the director’s equally promising debut, the 2004 “Primer.”