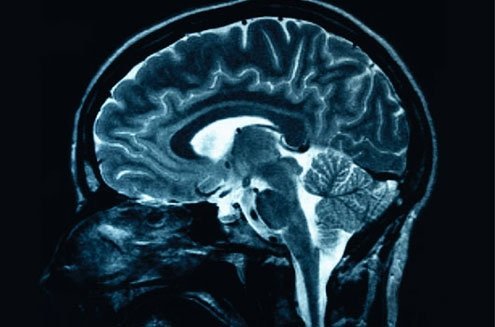 Scans are intelligent... up to a point.
A

major American newspaper recently published a report on the brain as it ages. The older brain is apparently more porous and prone to memory lapses. Miracle scans aside, the study broke no new ground. A few centuries ago the lapses of an aging brain coincided with the deterioration of an aging body, both of which were precursors to the not-so-unthinkable: death. Most societies foraged for wisdom among deeply forgetful great grandfathers, their deterioration making them magical passengers who spoke the fascinating, terrifying language of the precipice.

In his masterpiece “The Denial of Death,” social anthropologist Ernest Becker suggested all human action from infancy forward was driven by the unconscious mind’s attempting to reckon with the impossibility of its own eventual shut-down. As kind of “antidote,” or countervailing effort, he suggested humans rehearse their death, the dry run consisting of intellectual awareness, or anti-denial. Turn the page in your head, he said.

Easier said than done, particularly when a society in the thrall of preserving medical magic increasingly works to cushions the uncushionable.

Take the brain study, an earnest piece of work that nonetheless does everything in its power to not state the obvious, namely that time transforms the body’s only thinking organ into a endgame hiccup. The study refers to “memory deficits,” once known as forgetfulness (in some societies a precursor to wise gibberish.)

Michael A. Yassa, one of the study’s authors and a teacher of psychological and brain sciences at Johns Hopkins, sensibly points out that “older adults” are less able to separate events and more disposed to what might be called sentimental overlapping, which later forks into the constant bias and blurring known as senility. But the word senility long fell from favor. Aging, says the report, “blunts our ability to separate yesterday’s corn flakes from last Wednesday’s raisin bran, or today’s parking slot from Monday’s.”

These user-friendly references are intentionally Becker-defying. Their corn flakes casualness excludes death, admitting only decay, while suggesting it might slowable, if not reparable. Two observations put this remarkable resistance in perspective.

In brain’s hippocampus is the dentate gyrus, a lump of electrified tissue associated with learning, retaining, and thinking. According to Yassa, the dentate gyrus of volunteers between ages 60 and 80 “was not connected as robustly to the rest of the brain as in young people. In a nutshell, brains “did not seem to work as well.”

Fair enough, until the mind-bending clincher: “But there is hope.”

The hope consists in jump-starting neurogenisis, the process of creating of new brain cells, which research suggests regular exercise can help with. Experiments on mice suggest that running mice are more alert than sitting ones.

Since Jane Fonda’s 1980s exercise tapes American have tied physical fitness to mental alacrity (and beauty), implicitly suggesting physical rigor by nature helps compose and strengthen its mental counterpart. It does not, at least not alone.

More culturally potent is how fitness is advertised as a potential time-stopper. If handled properly, 50 can be the new 30. Faces and other age-ravaged body parts can be “corrected.” Dead brain cells can be replaced by new ones ad infinitum. Hope doesn’t die last, it simply doesn’t die.

The playing out of this death-denying lie makes for any number of mitigating studies such as the one headed by the dutiful Doctor Yassa. On the one hand, they no doubt help with the treatment of age-related illnesses; on the other they’re used to advance a social myth of regeneration that only stalls intellectual efforts to comprehend death, defining for the benefit of the still-vibrant, focusing on grief and the need for “closure,” an inexact word at best.

Outside art, little is done to encourage to “celebrate” Becker’s rehearsal process because to do so would acknowledge an absolute physical terminus that the promoters of affluence and its product lines must postpone or obviate, handing its details over to the spiritual.

Again, science and research directed at understanding the mind and body, and into repairing or preventing debilitating illnesses, occupies a vital place in human society.

Delusion kicks in only when life-unto-death vicissitudes, in this case aging, are portrayed as “lapses,” making self-repair into a timeless form of corporeal Manifest Destiny that not only emphasizes cradle over grave but pretends to make death eligible for upgrades.