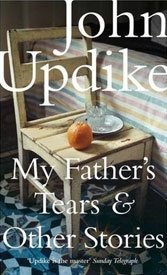 My Father's Tears and Other Stories: The half-full cup.
H

ere’s a “new” Updike book. More than worth your read.

OK: No book column ought to treat the same author twice in one six-month span. And this is def. Scriptorium’s #2 for John Updike.

BUT: The late-2008 death of our brilliant American chronicler suddenly gave him a celebrity-headline status he never wanted or enjoyed in life. It happens.

RESULT? By publisher sleight of hand we have “My Father’s Tears and Other Stories,” a selection of his previously published, but uncollected short stories. Save for the opening tale, “Morocco,” written 1969 and in print in ’79, all the works are Updike 21st century. They are blurb-proclaimed as “valedictory” (is this really a selling point?). Yet these stories simply share the author’s lifelong and obdurate determination to trace a narrative path, some meaning, in our everyday American lives.

In the title story, “My Father’s Tears,” he tracks our historically insistent religious impulse, as observer. The young narrator visits a worn Vermont farmhouse owned by his future father-in-law, Reverend Whitwood, a Unitarian. A “milky, vague” faith, the narrator decides. Until one day, its attraction is revealed… in the farm’s long, bare bathroom, and its mirror. Only Updike could swing this one: “…the bathroom was haunted by a small but intense rainbow, which moved around the walls as the sun in the course of the day glinted at a changing angle off the beveled edge of the medicine cabinet… To me this Ariel-like phenomenon was the magical child of Unitarian austerity.”

Updike never forgot Emerson’s promise that: “every natural fact is a symbol of some spiritual fact.” But despite his own two-year tenure as pastor for an upper Pennsylvania Congregational church Updike the writer didn’t have a spiritual “fact” on offer. Lucky for his readers, he was left searching for clues.

“The Varieties of Religious Experience,” tips its hat to our nation’s spiritual treasure hunt, and, tongue in cheek, to William James. In Updike’s version, three characters are involved in some way with the 9/11 tragedy. The story opens with elderly Dan Kellogg’s revelation: “THERE IS NO GOD,” he decides, while he watches the South Tower of the World Trade Center go down. “As abruptly as a girl letting fall her silken gown, the entire skyscraper dropped its sheath and vanished, with a silvery rippling noise.” A second figure-terrorist perpetrator Mohammed-will unquestioningly detonate for “the grandeur of the One.” While the third character, crash victim Carolyn, hears quite unexpected thoughts pound in her head: “Dear, Lord, have mercy.”

At tale’s end, Kellogg returns to his Episcopal Church attendance. For the warm fellowship, for his consoling churchwarden duties. And because the Towers had fallen but he was still alive, “and a shadowy God with him.” Hardly the drum-beating experience to convert readers. Yet it offers that small, delicate thread of optimism, which makes all Updike’s work luminous and unforgettable.

At volume’s close, here’s “The Full Cup.” It’s supposedly one of Updike’s final fictions, but not at all this reader’s take on “valedictory.” The writer may be close to leaving us, but he’s not yet ready for goodbyes. If your first reaction is to think of the cup half-full or half-empty question, you’re on the mark.

Updike’s story is both a writer’s summing up, and an oblique subtraction of that question from his life’s equation. Because for Updike the cup has always been full. That deep personal conviction goes back to his childhood, when he visited his great-cousin’s chicken farm, with its slippery board paths and deep well. “A tin dipper rested on one of the large sandstones encircling the spring, and my elderly host would hand it to me, full…that icy water had an ingredient that made me eager for the next moment of life, one brimming moment after another.”

At 80, getting ready to take his life-prolonging pills, he fills his bedtime glass in the kitchen:

“I lift the glass, its water sweetened by its brief wait on the marble sink top. If I can read this strange old guy’s mind aright, he’s drinking a toast to the invisible world, his impending disappearance from it be damned.”