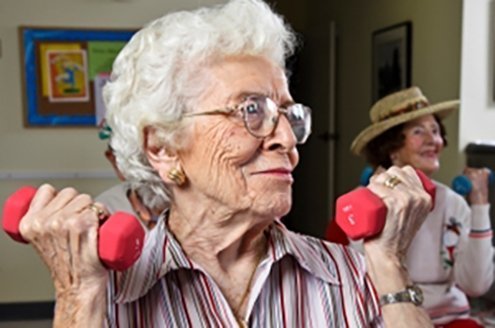 No Norwegian Metallica with sweating and grunting on the side.
W

hat with everyone around me graduating and talking about how old they are and how they now belong to the adult realm, I’ve been evaluating my own position in the world.

As a college student, I’ve realized my lifestyle of late hasn’t much resembled the adult life everyone dreams about as they prepare to leave college. Rather, I seem somehow to have skipped a generation, moving inadvertently from adulthood to geriatric life.

I use the term geriatric literally. I’m not living the life of a sprightly 65-year-old who still enjoys the trotting pace of a terrier. No, I’ve traveled into the over-75 domain in which you yell at the television about the virtues of “Ike” Eisenhower hoping the shamed TV turns itself on.

I’m not exaggerating. In lifestyle terms, I’ve avoided the torturous 30s in which I question everything I’ve ever undertaken because I’m not famous yet. I’ve advanced past the insinuating 50s when it suddenly hits me that winning Homecoming Queen didn’t get me the life I wanted.

Why bother with any of that, I wondered, if I could move directly into the over-75 division?

By now you’re probably wondering how I accomplished such a feat. Some life snippets may help illustrate my transition.

Last week was exam week at my college. That was when a few elderly habits began appearing. For example, almost everything I consumed was liquid, or at least not solid. I drank tea constantly. I actually found myself complaining that the tea had been stronger at the beginning of the term — among the endless, if justified complaints of the fastidious over-75 bracket.

I ate primarily soups (preferably broth-based ones because the others are so rich) and yogurts (chewing on the lumps was both tiring and distracting). I did try diversifying my diet to include a nut bar, but every time I bit into one, I was instantly annoyed at how hard it was.

My routine started as part of an effort to get more productive morning study hours. But it soon got out of hand. I’d anxiously wait for my alarm to go off, feeling restless and worrying that the day might start at the ghastly late hour of 7:30.

Most concerning of all, I found my internal monologue complaining about the youth around me. Admittedly, this is something I do normally, but not in a cutesy, “Oh I’m just a girl born in the wrong century” way. I’m truly frustrated.

For example, I’d be at the market when little kids appeared, screeching with joy and running around wildly. That set off an internal tirade. Where, I wondered, where the parents of these screamers and why they hadn’t they taught their kids manners and awareness their surroundings? Or I’d find myself studying at library and wonder all at once why none of the students, also allegedly studying, understood that a library normally requires silence, especially during exam time.

Worst of all, I’d be frustrated with the mirthful sounds coming from down the hall at 6 p.m., a time when people should really be trying to calm down, particularly on a rainy Tuesday.

But the most damning evidence of my leap into old age came when I was naturally drawn into a strengthening class. Once in the gym, it didn’t take long to see the activities were geared toward 80-year-olds. The strengthening was for older bodies. No Norwegian Metallica with all its sweating and grunting. The highlight was watching the ladies flirting with a local stud who wore a sailor stripe shirt and ankle weights, a clear sign of his interests and physical capability.

Another high point was the teacher’s motivational speech. We needed to keep pushing ourselves, he told the group, lest we end up like the man who had a coronary but lacked the upper-body strength to get up, and was found nearly dead by the neighbors a few days later. One more time, people!

I got the sense I could have told a silly joke and gotten rapturous laughter. But since I still have about 60 years to look forward to before I reach 80, I realized I should probably ease up on the elderly bonding.

That said, and having lived the lifestyle of a card-carrying member of the over-75 bracket, I now know what awaits me. I don’t mind what’s ahead. In the meantime, I’ll work on my upper body strength.