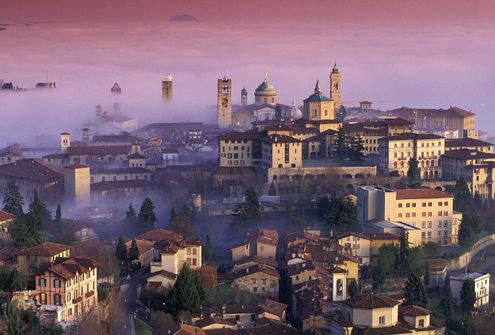 In the mist, Bergamo is magical.
M

y husband Dan and I love the mountains. We’re originally from Texas, which includes some of the flattest, driest terrain on earth. Now we’re in Milan, on the northern plain, with the mountains close enough for a day trip.

My friend Ileana is Bergamasca. She’s also my dry cleaner. Go to Bergamo, she said, and gave me two restaurant tips. Dan was dubious to start: information from a dry cleaner? The Gambero Rosso guide persuaded him. One of her recommendations was listed.

Bergamo, birthplace of Angelo Giuseppe Roncalli, Pope John XXIII, is actually two cities: Bergamo alta and Bergamo bassa (known as Cittá alta and Cittá bassa). Upper Bergamo is on the foothills of the Alps, while Lower Bergamo is on the plain. The train station is in Lower Bergamo. Though we knew a long walk awaited us (15-20 minutes), we decided to hoof it from the station to the funicular.

Lower Bergamo is a modern city with wide, tree-lined boulevards. It was developed mostly in the 19th and 20th centuries. The walk from the station is a straight shot up the grand Viale Papa Giovanni XXIII, which changes its name to become Viale Vittorio Emmanuele II. Banks, not churches, crowd the urban landscape.

When we reached the funicular we found our way to the back of a crowded car and watched Lower Bergamo recede beneath us. The funicular rises steeply past an outer perimeter composed of walls that form concentric rings around the city. Trees and vines grow between the walls.

I don’t like heights, but giddiness took over. “This ride has already made the trip worth it,” I told Dan. “I’d be happy to come again just to ride the funicular again.”

Upper Bergamo is small enough to explore before lunch. After a walk up Via Gombito, the upper city’s main drag, I sensed something different about the place but I wasn’t sure what. When we got to Piazza Vecchia in the center, it hit me: “Do you see what’s missing here?” I asked Dan.

It must have dawned on him at the same time.

Not a fast food restaurant in sight.

This is was not Milan.

Closer inspection revealed there were no chain stores at all. Here was a thrillingly untouched ancient Italian city. Families pushed strollers the size of Smart cars while ubiquitous Vespas rushed by. Bergamo alta had a genuine feel of timelessness. Ambling through an arcade we came upon the Cappella Colleoni, an impressive pink-and-white marble addition to the old stone duomo. Outside the chapel, a man rubbed three orbs on an iron fence.

“Why?” I asked Ileana later.

Ileana’s food choice was family-run La Marianna (see below) atop Colle Aperto (literally Open Hill), the oldest and largest pastry shop in Upper Bergamo. Pay attention because the sweet-tooth crowd is avid enough to make you overlook the upstairs restaurant, where attention to detail is second only to food. The dining atmosphere is friendly and relaxed, with a picture-window view into the kitchen.

Dan took in the vista while I watched the efficient bustle of the cooks. As we finished our meal, Dan recommended I take flowers to Ileana. I did, knowing we’d return to Bergamo.

LA MARIANNA is the oldest and largest pastry shop in Bergamo. Atop Colle Aperto, it boasts splendid views of the countryside below. The restaurant sits over the pastry shop and offers modern Italian cuisine and Bergamasco specialties in a friendly and intimate atmosphere. A formidable wine list and helpful staff complete the treat. Major credit cards. €40 per person. Call ahead. Closed Monday and most of January.

The Bergamasco dialect, indecipherable to Italian speakers, has its roots in vulgar Latin and can sound harsh and clipped. Few born after 1960 converse in it. The dialect gained modern prominence in 1978, when director Ermanno Olmi’s “L’albero dei zoccoli” (“The Tree of Wooden Clogs”), filmed entirely in Begamasco, won the Palme d’Or at the Cannes Film Festival. The movie was dubbed into Italian for national distribution. Some expressions in dialect:

— Fà marù. To be caught red-handed.

— Troàs tra gnach e petach. To find yourself between the anvil and the hammer.

— La farina del diàol la và töta in crösca. The devil’s flour is in the bran.

— Và fò del bósch a fà la lègna. Don’t go there (in the sense of flirting with a friend’s girlfriend. Literally, “Go into the forest to cut wood.”)