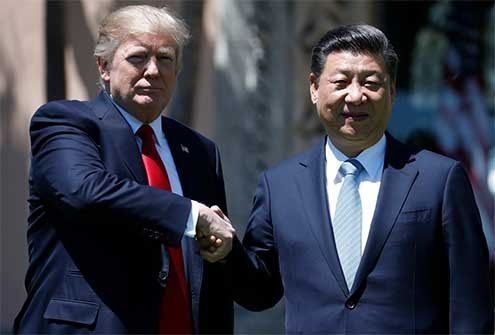 Getting a clear read on Trump's America and Xi's China can be tough going.
I

f one hears a common refrain in Washington these days, it is that the Trump administration is breaking norms. Most of these norms are procedural. For example, in naming billionaire Carl Icahn as a special advisor on regulation, Trump placed the corporate raider in a position not only to influence the future of a company in which he was a major shareholder, but also to improve his own financial wellbeing. Such a move, given the potential conflict of interest, would once have been considered unthinkable. Though Icahn lasted less than a year — he resigned in August — the precedent was set.

But this breaking of norms need not be purely negative. Among the more exciting and previously taboo debate taking place since Trump took is whether free trade actually supports American interests. Both Trump, who views the world in zero-sum terms, and Commerce Secretary Wilbur Ross, have long warned about China’s unfair trade practices. Their approach to the subject is anything but shy. The effect has been a burst in creative thinking in the Washington policy community.

Not so long ago, the advance of free trade seemed unstoppable. The collapse of the Soviet Union and the signing of the North American Free Trade Agreement (NAFTA) — over the early-1990s objections of the surprisingly popular third party presidential candidate Ross Perot — ushered in an era of globalization. The so-called Washington Consensus, a hazily defined list of pro-market policy prescriptions for developing countries, gained acceptance throughout the United States policy community and was applied internationally. As recently as in 2016, the U.S. pinned its Asia strategy on the Trans-Pacific Partnership (TPP), a free trade agreement binding 12 Pacific Rim countries. TPP, in addition to broadening trade relations between member countries, would help contain China, excluded from the agreement.

Then came the 2016 presidential campaign. Independent-turned-Democrat Bernie Sanders revived an older brand of left-wing politics that questioned the wisdom of unfettered markets, calling attention to the fate of displaced workers. On the right, Trump, though less informed by a coherent ideology, broke with the longstanding free trade commitments of the Republican Party. He blasted unfair trade agreements, including not only the proposed TPP but also NAFTA and called for state intervention to protect U.S. industry. Today, Washington has abandoned TPP, is renegotiating NAFTA, and, more generally, has pushed forward a series of trade restrictive maneuvers.

The iconoclasm of Trump has had a liberating effect on policymaking. Gone are the truisms of the past. In are new possibilities for creative policies. Nowhere is this more apparent than on matters related to China. For decades, the U.S. has attempted to mold China into a “responsible stakeholder.” By incorporating China into global institutions, the theory went, the country’s economy would develop and eventually its leaders would embrace a market economy. Today’s realities demonstrate the failure of that tactic. China routinely steals intellectual property from U.S. companies, limits access by foreign companies to its own markets, and uses its regulatory agencies to forward its geopolitical ends. For example, to protest South Korea’s deployment of an American missile defense system, China forced stores owned by South Korean conglomerate Lotte Group to close due to unproven fire code infractions.

Though observers noted China’s continued failure to live up to the “responsible stakeholder” standard, there was no significant U.S. response. Complains lodged with the World Trade Organization usually disappeared into bureaucratic sinkholes. Now, less restrained by free market dogmas, American officials are behaving more aggressively. In September, the president blocked the acquisition of Lattice Semiconductors by a Chinese-money backed private equity fund. Similarly, Republican Sen. John Cornyn has been pushing legislation to overhaul the government process for reviewing foreign investment in strategic U.S. industries. Across the board, even while trying to collaborate with China on other pressing matters such as North Korea, the tone of the new U.S. has been more reflective of the views of China trade hawks, including White House National Trade Council Director Peter Navarro, the author of a book with a telling title: “Death by China: Confronting the Dragon – A Global Call to Action.”

But “shaking things up” is not per se a metric for governance. More to the point, many accepted trade notions still hold true. If, for example, the U.S. decided to undo some of the oil trading liberalization that occurred under the Barack Obama presidency, it would hurt U.S. energy security, which depends on a robust international free natural resource market. Too often, given the Trump administration’s major policy blunders, the advantages of this less tolerant approach seem minor at best. Emboldening U.S. policymakers to change their views toward China’s unfair trade practices pales in significance to generation-defining strategic errors like the decertification of the Iran nuclear agreement.

Still, there’s something to be said for a willingness to militantly rethink policy, and U.S. decisionmakers, particularly in post-Trump governments, will be sure to reap the benefits of such reimagining. For too long, the shibboleths of the Washington consensus, in terms of global economic issues and foreign policy writ large, have resulted in conformity in ideas and led the U.S. astray. The Iraq War, which found wide support among a diverse set of thinkers, stands as a legacy of this conformity.

Perhaps, then, despite many caveats, the transformation of certain unthinkable ideas into thinkable ones should be seen in positive terms, a beneficial legacy for an administration that badly needs one.