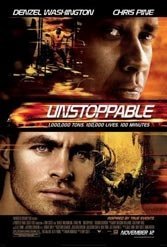 There are two kinds of Tony Scott movies: Those that put action in the service of people (“True Romance” and “Spy Game”) and those that use people as action’s sentimental toys. His train-gone-rogue flick is very much the latter. No mystery here. In rural Pennsylvania, a freight train with lots of wicked material on board takes advantage of human idiocy and begins plowing full speed ahead, a ghost-rider at warp speed (“A missile the size of the Chrysler Building,” not to put too fine a point on it). Back at the railroad ranch, the good train folk realize what’s up and see apocalypse coming. Their captivating but foolhardy attempts at damage control only produce … damage.

Sadly for wanton apocalypse, train 777 picked the wrong day to sow its wild oats. Old-school train driver Frank Barnes (Denzel Washington) and his rookie-ish conductor Will Colson (Chris Pine) happen to be in the neighborhood. Track-wise Frank is a widower with two teens who work at Hooters (oh yes, he’s just forced into early retirement by the railroad); Will is a frustrated but devoted dad whose wife has taken out a restraining order to keep him from seeing his young son. They’re a perfect two-generational recipe for testosterone-laden train stopping. Who better than these two to “couple in reverse,” the game-saving formula?

Scott’s train sequences are spectacular and Denzel knows this kind of hokey, eye-twinkling bravado by heart. Sorcerer’s apprentice Pine (“We gonna run this bitch down…”) exists to make the male bonding work, and he does. Daughters and wives applaud.

Another thing about Tony Scott: he’s a wily veteran who harks back to studio system that made allowances for bad movies but not not bad entertainment. Roughly based on the CSX 8888 incident that occurred in central Ohio in 2001.