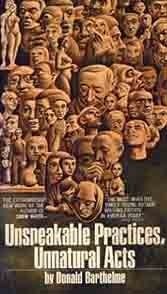 American Donald Barthelme was a snake-charming Magritte with a pen, a satirical spokesman for global overload, a carry-over Kafka who helped make the 21st-century friendlier to the likes of George Saunders and China Miéville. Two openings speak to his sorcery. “Can We Talk” begins: “I went to the bank to get my money for the day. And they had painted it yellow.” “A Picture History of the War” starts: “Kellerman, gigantic with gin, runs through the park at noon with his naked father slung under one arm.” In the lushly sexual “Alice,” Alice’s zipper is “located at the rear of Alice’s dress running from the neckhole to the bumhole yes I know the first is the attribute of the dress and the second is an attribute of the girl…” But undressing Alice matters, as does getting around non-grammatical and chaotic tug of her thighs (“…chaos is tasty AND USEFUL TOO.”) Then there’s a police force band “disguised as postal employees,” an “idea that didn’t work,” but who refuse to disband in the event the commissioner ever changes his mind.

Barthelme’s gift was to ramble around spellbound, to cheer “felicitous trularity,” to “encrandulate” while revealing “mortalaciousness,” to remind you that some girls hide Comanches in their rooms, to make up “purposeless” helium balloons as large as a New York City sky to call attention to the “misallocation of self,” a widespread mislocation that is both the sorcerer’s plague and his muse.

Barthelme (1931-1989) never wrote for the madding crowd. His often-zany stories were like so many Rorschach tests queerly put to words (“See the moon? It hates us.”) Life, to him, is an ongoing rough draft in which garlic, antihistamines and Berlioz coexist. “Put a nickel in in the soap machine and it barks.” Of course it barks. Anything beside a bark would be too simple, too neat, too lacking in the lusty chaos that his “queen of holes damp” Alice finds oh-so-handsome.