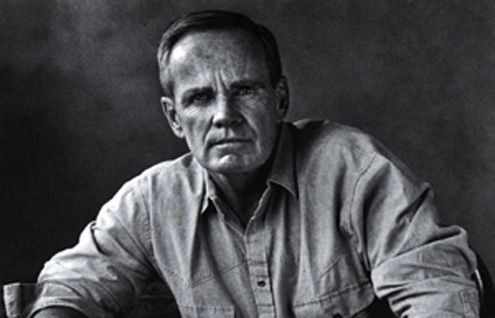 ou say you loved the Coen brothers’ dazzling, daunting bang-bang-bloodspatter movie. Next you want to tackle the book it’s based on? You’ve got a great surprise coming.

Cormac McCarthy’s fine novel is flights of angels ahead of the film.

Forget PR about “the most faithful (film) adaptation imaginable.” That must rank as one of the funniest BBLs (Big Blurb Lies) of the past year.

Armageddon is what the brothers promise, and deliver. In the form of scattershot drug wars, and psychotic hired assassin Anton Chigurh. Who performs the job description gladly. Even moonlights a few extra, wanton deaths. Just for fun.

And yet…”No Country for Old Men” is opening line to Yeats’ spiritual-search poem: “Sailing to Byzantium.” Which is the voyage McCarthy has in mind for his prose protagonist, Sheriff Ed Tom Bell. Like Yeats’ speaker, Ed Tom is on a quest to maintain his soul. Against the material world. Too bad Bell’s voice gets lost in the Coens’ purely visual carnage blast.

Let’s figure what celluloid and print versions do share.

2. This bare bones scenario: Shooting antelope in a bleak wind-tossed Texas landscape, Nam Vet Llewlyn Moss encounters a cluster of bullet-riddled cars and shattered corpses. A drug deal gone bad. Moss takes the abandoned payoff millions and runs with it. First and finalizing mistake. Its Sheriff Bell’s job to find Llewlyn first. To save his life. Drug gangs and Chigurh compete in their own slaughterhouse hunt for him. A dance of death charts the common action-line.

After that, there’s still the yawning movie/book divide.

In Coen-land, McCormac’s Byzantium take is soon cancelled. Their unrelenting gore splash resembles a very different Yeats poem: “The Second Coming.” With Yeats’ apocalyptic beast-AKA Chigurh-slouching toward Bethlehem. An assassin who wears his cattle-killer stun gun strapped on like a third arm.

To make this gut-wrenching eight-Oscar thriller the Coens just eliminate McCormac’s more complex construct. Strip Bell to an elderly nostalgic presence. And toss the many voices and acts which tremble with layered meaning.

They remove Bell’s back story. Full of the ex-soldier’s World War II reflections on guilt. A conscious remorse absent in the several ‘Nam vets turned killers.

Above all, the filmmakers drastically slash Ed Tom’s first person chapters. Thirteen of them. The only numbered or titled sections in the book. Not by chance two of these close and end the novel. A moral framework the Coens reduce to effective startup voice-over. Then tune down and out.

Gone are Bell’s elegiac reflections on a changing world. And his conversations with his lifelong wife. He calls her “my better half.” Together they refuse the fast-enveloping chaos spewing death around them.

Bell knows where he’s heading. He announces it in prologue summing: “Somewhere out there is a true and living prophet of destruction…I have seen his (Chigurh’s) work…I won’t push my chips forward to meet him… I think a man would have to put his soul at hazard. And I won’t do that.” Because saving his soul is a man’s true business.

So if you loved the film… kudos for its brilliantly shaded Comix graphics. But when you forget it all-save for Anton’s haunted face- the book remains. Bell’s spiritual quest in a darkening world has mythic spin. It reverberates with the dim, distant promise of meaning. And with the near-miraculous tenacity of human hope. That last gift in Pandora’s emptied box.