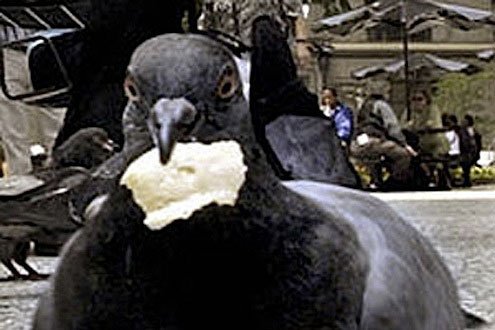 o, she wants to know, pointedly this time, what’s it like being single at 50, living alone in a big apartment with fat rooms, empty beds, no wife, no child? Next, she asks about the pigeons. All the pigeons of Rome, she overstates gladly, have apparently gathered to loiter on my roof and terrace. How can I stand them? Why don’t I get rid of them? How do I sleep with all the cooing, the pecking, and the occasional liberal bird that tumbles from the eaves through the living room window, flapping rampantly until I shoo it back into the slipstream. Why don’t I just shoot them, she asks, or maybe there’s an effective modern poison?

I’m not sure how to answer. The pigeons are a condition, not a choice, like single-ness. They happened, mostly over time, and stayed on. I’ve done nothing explicit to expel them, which I suppose constitutes a kind of appeasement. I’m the Neville Chamberlain of pigeons, but an effective one, keeping avian Armageddon at bay.

How typically liberal, and poetical, she exclaims, a little disparagingly. She’s a political scientist, once my lover, now with a husband and child in tow (at a hotel). She teaches history in the Southwest, has published arcane but respected books on modern political theory. I suspect she’s very good at what she does.

But getting beyond birds and single-ness is a complex undertaking with former lovers. What’s left after the detail-saturated amenities? (Yes, I hang the wash in the open air, even in winter; no, I don’t have a car; yes, my thermostat is broken; no, I don’t have a girlfriend.)

Political discussions unsettle me. Not because, hewing idealism, I find little good to say about my America, but because the tone’s too carbonated: It’s as if 200 million cars reached the same intersection at once, with the driver of each certain the other should yield. Talking politics is surrogate road rage.

She jilts the remark with a smirk. It’s too smug, too quant — “typical,” she intones nasally. “Here,” she follows up, extracting a folded sheet of paper from her baggy purse, “read this.” I notice her tapered red fingernails, new accessories, as if she’d swapped her casual past for a chance to mate with the Dowager empress. She taps the sheet with the nail of her right index finger, circling it clockwise around the headline. The motion recalls different times and circumstances. “This,” she says, staring at me, “should set you straight.” What it really does is set me back.

People change with age. They can, for example, rationalize adultery into a state of pre-faith or diminish skepticism of the powerful as a self-indulgent ethusiasm of youth. They can adopt the creed of spouses and perceive threat differently when the presence of children embroiders the defensive complications of morality, mortality, and survival. They can gradually become harder and more deeply vigilant, even bellicose, promoting a secure version of history that eliminates exception and encourages the primacy of absolute right and wrong. What she’s handed me, it turns out, is an essay by a man named Victor Davis Hanson, who dispenses vitriolic eloquence for the conservative right. He does it well. Hanson, a Hoover Institute member, is also a credible military historian and a respected writer on Greek and Roman culture.

“So, read it,” she says. And I do. The essay, titled “The Real Humanists,” is an aggressive defense of current geopolitics with reverance toward noble militarism. It is yet another American mission statement devoted to erecting a just but ethnocentric world at any cost. Hanson complains bitterly about “obsequious Europeans” and leftists “who are ignorant of history.” He grumbles that “Western feminists, homosexual-rights advocates, and liberal reformists have never in any definitive way expressed appreciation for the Afghan revolution.” He concludes that “George Bush’s radical efforts to cleanse the world of the Taliban and Saddam Hussein, bring democracy to the heart of the Arab world, and isolate Yasser Arafat [are] the most risky and humane developments in the Middle East in a century — old-fashioned idealism backed with force in a postmodern age of abject cynicism and nihilism.” Hanson’s mini-biography states that he lives and works with his family on a 40-acre tree and vine farm near Selma, California, where he was born in 1953.

What do I think, she asks? It’s a coincidence, I reply, which momentarily baffles her. Here in Rome, I explain, is her liberal, one-time lover alone among stubborn pigeons, unwilling to poison or slay them, born in 1953; out there, in California, is Hanson, a “cleansing” hawk who lives with family among trees and vines, spelling out an ours-to-fix view of the American obligation vaguely kin to veni, vidi, vici, also born in 1953.

I return to Hanson’s percussive prose: “If [the Marines] are successful in crushing and humiliating the fascists there [in Iraq] and extending the victory to other spots then the radical Islamists and their fascistic sponsors will erode away. But if they fail or are called off, then we will see Days of Sorrow that make September 11 look like child’s play.”

Humiliating the fascists? Eroding fascistic sponsors? Days of Sorrow? Missing are only the redemptive Dogs of War, but they’re out there, howling.

In 1979, when I met her first, we attended a feminist rally at Piazza Indipendenza, and after that scurried away from tear gas to Piazza del Popolo, where the late Giorgio Almirante, then the hero of the neo-Fascist right, inveighed against Italian communism. Typically, all was conspiratorially black or white. Italy was clean, communism filthy; good Italians were honest and hopeful, leftists were dogmatists, and would-be terrorists. The right’s choices were just and Herculean in spirit; the left’s tyrannical and absurd. I remember how silly it seemed silly to us. We mocked categorical imperatives. We disdained certainties. We saw history as capriciously contemptuous of dicta and desires insisted upon as right by a state, regime or faith. We concluded that enforced remedies, cultural organ transplants of a kind, were those most likely to fail.

To my prolonged silence, she says, as if signing off on an agreed-upon contract: “It really is about good and evil, and about changing the world. It’s our duty to change it, and change is never popular.”

Maybe there’s a poison for the pigeons, I think to myself. Or maybe there’s an air rifle, to crush, to cleanse, to erode. Something by which to make it right. In any case, given the times, it’s probably time to consider my options.