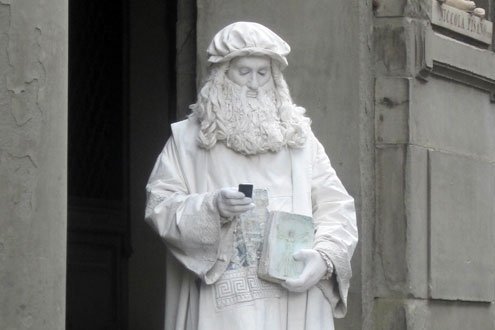 The lives of the saints (and sinners) did not include text messages. Photos by Jennifer Allison.
S

ome time ago I deleted my Facebook account. I didn’t announce it with a dramatic farewell post or let my family and friends know beforehand. Since my “friend” list tallied a whopping 52 people, I just slipped away unnoticed. Or so I thought.

The next day I got a phone call from a friend asking why I’d disappeared. She knew my reservations about Facebook, social media and text message-driven relationships — we’d talked a lot about it — so I didn’t think my decision would surprise her. In our chat, she admitted she’d also lost her interest in social media, lamenting her minor addiction to it, and wondered if she’d be able to “quit” too.

My decision to limit my virtual world came after months of research and self-reflection. Secretly, I’d compared my Facebook profile to previous online dating profiles, and though I wasn’t trolling Facebook for romance (although was shocked at how many lonely people do) I was nonetheless inviting virtual “acceptance” from my friends and family, as in:

• Am I worthy of your admiration?

I wondered if these questions weren’t fostering my own narcissistic world.

One evening, after more than 10 minutes of scrolling through a friend’s Paris vacation photos and update after update, I was seized by sudden disappointment. Shouldn’t I be seeing these photos and hearing about my friend’s Paris adventures over a cup of coffee instead of voyeuristically viewing them on my computer screen? I hadn’t even phoned her since her return.

I realized the virtual connections to which I’d grown accustomed weren’t the ones I wanted to foster. They were illusions. I didn’t want constant partial connections. I preferred the kinds of demands that physical friendship and intimacy require.

And so, just as quickly as Facebook allowed me to create a profile, I deleted it.

Weeks later I drove to the store and pondered over choosing the perfect box of Christmas cards. Admittedly, I hadn’t been particularly diligent about sending cards in recent years. Maybe it was social media or the ease, safety and instant gratification of shooting a quick “Merry Christmas” text or writing up a holiday post. I can’t say for sure. I can say there was a correlation between the birth of my virtual world and my Christmas card laziness.

By chance, just after I’d sent my handful of Christmas cards, I happened on an article about British anthropologist and evolutionary psychologist Robin Dunbar.

Dunbar has done extensive research on the human capacity for friendship — a number he suggests tops out at only 150 — as well as the ripple effects of social media. In one study, Dunbar and his associates charted the Christmas card-sending habits of the English. The key finding was the total population of households that each set of cards went to: 153, or roughly 150. The same number of people Dunbar suggests our brains have the capacity to include as true relationships.

In a separate interview, Dunbar was asked about the role the web played on the grouping capacities of the brain. “Can we manage to have meaningful relationships with more than just the old numbers? Yes, I can find out what you had for breakfast from your tweet, but can I really get to know you better?” No was his reply. People must actually meet to make a relationship work.

He added: “We rely heavily on touch and we still haven’t figured out how to do virtual touch. Maybe once we can do that we will have cracked a big nut. Words are slippery, a touch is worth a 1,000 words any day.”

No matter how hard Facebook and other social media sites work to claim that online friendships are substantive, real human friendship, the kind that includes physical contact and a level of intimacy, appears to demand something more tangible than words and photos on a screen.

Not long after I left Facebook, the friend I’d debated the subject with did the same. Since then, her “direct” friendships and her relationship to art and work have all grown in importance. When I asked her if she missed Facebook — she’d been a prolific poster — she didn’t have a qualm. “Not at all,” she told me. “In fact, I feel strangely free.”