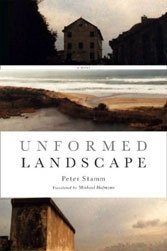 By Peter Stamm, translated from the German by Michael Hofman

Twenty eight-year-old Norwegian customs inspector Kathrine has never been south of the Artic circle. That changes when she discovers that her sexually-dulled second husband Thomas has made up much of his colorful past to get her. She absent-mindedly cheats on him with childhood friend Morten to then discover her apartment emptied out. Thomas has made his point. Demoralized, she begins a haphazard three-week trek — “my honeymoon,” she calls it — that takes from her fjord village near the Barents Sea to Oslo, then on to Paris and the port of Boulogne, ostensibly seeking out an email pal on whom she had a crush.

Acclaimed Swiss novelist Stamm builds a gentle, porcelain-chiseled portrait of a young woman who stubbornly refuses to accept a loveless life. “You expect too much from other people,” says her best friend, a Russian captain, who soon disappears at sea. She doesn’t dispute this, at least not openly. After all, her first husband is a town drunk and her eight-year-old son by that marriage, Randy, doesn’t seem to tug at her maternal instincts. Katherine convinces herself that bigger and grander landscapes must lie beyond her insulated arctic nest. “Not a lot, my life,” she thinks.

And yet her journey brings only the “bigger and the noisier.” People and cities wash through her and recede. The French perfume “Poison” makes her wonder why anyone would name a fragrance after fish. “There’s not a lot of room in a person,” she decides, fearful of the new.

So “the little Lapp” girl goes home, and once there directs her life to acquire heft, dimension, purpose. Kathrine’s journey is a low-key rite-of-passage. If wanderlust gives life its formative grammar, choice is safe harbor. Stamm movingly portrays Kathrine’s modest ambitions through spare prose, focusing less on the shedding of tears than on how they dry.