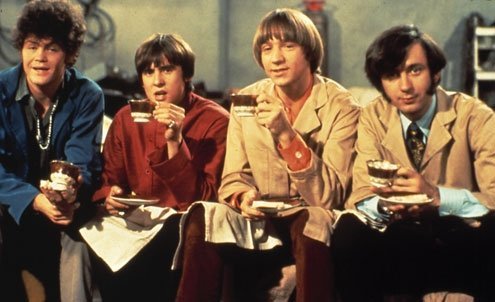 The Monkees: Not your average critics of "unfettered capitalism."
P

ope Francis wasn’t listening to AM radio in the mid-1960s, when the first blast of anti-consumerism snuck into mainstream American pop music. Not into folk, which had been carrying the burden of unions and the downtrodden for decades, or into the blues, which had long made it a point to howl, or even into Motown, which tended to toward beat-savvy ballads about love and grief. Pop was the restless middle ground.

Pop and the pope came to mind when the latter released his recent “new tyranny” letter, a critique of capitalism’s inequities and risks that would have made Woody Guthrie proud. It also reminded me of two highly improbable but mainstream AM songs. One, The Monkees’ 1967 “Pleasant Valley Sunday,” was a hit; the other Ray Stevens’ 1968 “Mr. Businessman,” only a modest success, but both veered from the expected.

At the time The Monkees were America’s made-for-TV Beatles, mop-haired youngsters who romped around on a mainstream comedy show lip-synching other people’s songs, most hit singles about boys and girls and the complications in the middle. What they weren’t was Bob Dylan (or Tom Lehrer).

Ray Stevens, born Harold Ray Ragsdale, was an anything-for-a-buck country-oriented singer known for crossover Mad Magazine-styled classics like “Harry the Hairy Ape” and “Ahab the Arab” (about “the swinging sheik of the burnin’ sands” with his camel named Clyde.)

The Monkees and Stevens were not candidates for songs for social messages, making their one-song forays into relevance something of a shock — so much so that few noticed.

The Monkees “Pleasant Valley” came first, thanks to the husband-wife team of Gerry Goffin and Carol King (she would later launch a successful solo career). Goffin and King grew up in affluent suburban New Jersey, which the song harpooned. Just why The Monkees, a much a mainstream act, decided to pick up it, spinning song and lyrics into the public eye, is something of a mystery.

“Pleasant Valley Sunday” is a three-minute up-tempo suburban snapshot that pokes at the perils of the “new tyranny,” to borrow from the pope. In Pleasant Valley, charcoal burns everywhere in “rows of houses that are all the same/and no one seems to care.” There’s Mr. Green who’s so serene because “he has a TV in every room.” All live in “status symbol land” while complaining about how hard life is. The kicker is the importance of getting out: “Creature comfort goals/They only numb my soul/and make it hard for me to see/My thoughts all seem to stray/to places far away/I need a change of scenery…”

Revolutionary? Anything but. Surprising? Very, particularly at a time when so-called counterculture bands did most of the heavy lifting. The Monkees instead flew under radar but in plain sight, using their popularity to get in a mainstream knock at the system.

What the Georgia-born Stevens accomplished was more remarkable — especially given his parody-oriented background. His long-forgotten but catchy “Mr. Businessman,” written in 1967 but released early the next year, reached the top-30 in spite of itself, in some ways out-Dylaning both the Bob and Mick Jagger, whose Rolling Stones had weighed a few years earlier with “19th Nervous Breakdown” — another anti-conspicuous consumption hit.

Stevens’ lyrics took off from a single piano chord, opening with the no-nonsense command: “Itemize the things you covet…” The song-line was articulate and crystal clear. Its target was the businessman archetype of the day, a hypocrite who can’t live without “bigger cars, bigger houses,” a “charlatan” therapist, a hooker, is plagued with “deep disturbing doubts about religion” but exempt from “guilt and shame.” If you want to “qualify to be alive,” get out before it’s too late. The overly orchestrated rhetoric is predicable enough until the stinging coda, which blows up happy endings.

“Spending counterfeit incentive/Wasting precious time and health/Placing value on the worthless/Disregarding priceless wealth/You can wheel and deal the best of them/And steal it from the rest of them/You know the score, their ethics are a bore.

“Eighty-six proof anesthetic crutches prop you to the top/Where the smiles are all synthetic/And the ulcers never stop/When they take that final inventory,/Yours will be the same sad story everywhere/No one will really care, no one more lonely than/This rich important man, lets have your autograph/Endorse your epitaph…”

The “endorse your epitaph” closer was among the more scathing bits of lyricism in an increasingly restless time, but Stevens’ musical wariness was soon superceded by very real waves of social unrest, and his powerfully repetitive piano note got lost in the shuffle.