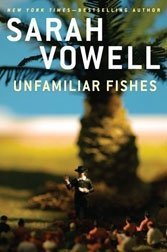 Acerbic social commentator and NPR darling Sarah Vowell didn’t find much joy researching, “Unfamiliar Fishes,” her third comic micro-history. “I didn’t come [to Hawaii] for direct sunlight or ‘fun’,” she says. “I came to Hawaii because it had been attacked.” Fun isn’t anywhere in the cards. This is a history of the United States’ imperial conquest of the island nation of Hawaii. Not a guide to surfing.

The rub is that Vowell never does her topic justice. Entranced by the sound of her own voice, she scolds must-be idiotic readers for romanticizing a tropicalia of indigenous peoples once run by a self-sustaining, incestuous monarch but later spoiled by the arrival of uptight New England missionaries. God, western wardrobe, venereal disease, sugar farms and a democracy of white men put an end to Hawaiian control.

But Vowell has a nebulous sense of what Hawaii “used” to be, or what it once meant to be Hawaiian. Hawaiian royalty, she writes, believed in incest to keep the royal blood pure. She then drops in a joke about calling child protective services; insensitive for a woman who always says her biggest soft spot is Native Americans.

Fascinating moments are scarce but still make the book worth a read. There’s the story Henry Obookiah, a young Hawaiian shipped off to New England to learn Christian ways so he could return to his native land and win converts. He dies before this can happen but does manage to produce a Hawaiian translation of the Bible. And it’s infuriating to learn that there was never any “treaty of annexation” between the United States and Hawaii despite claims to the contrary: In 1898, President William McKinley signed the Newlands Resolution effectively laying claim to sovereign territory.

Ultimately, this is more kitschy travelogue than impartial ethnohistory. For a better taste of Vowell, try her history of the Puritans (“The Wordy Shipmates”) or American presidential assassination sites (“Assassination Vacation”) instead.