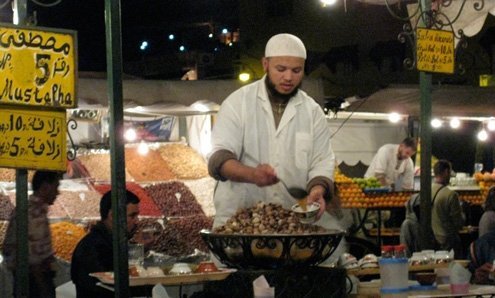 A vendor sells snails on Djemma el-Fna. All photos by Ingrid Williams.
A

fter visiting a new place, I often think about all of the things other travel writers overlooked. Before leaving for Marrakech, I had read in several sources that it was the new St. Tropez — a modern, fashionable haven for jet-setting Europeans in northern Africa. A place where luxurious riads, in the heart of the Medina (the old city center), were pampering guests in beautifully restored courtyard mansions and sparkling Moroccan hammam spas. A place where knocking on the right door would magically draw back the city’s dusty veil to reveal glittering boutiques and atmospheric cafés. But reality is rarely as glamorous as a poetic guidebook author might lead you to believe.

Although I did spot a few twenty-something Marrakchi women in designer sunglasses and slick ponytails whizzing around on shiny motorini, most of the local women remained out of sight. This Muslim tradition also extended to the cafés, which were the sole provenance of men sipping mint tea and watching sports on flickering black-and-white television sets. Small children with dirty hands begged for spare change and old, toothless men in hooded robes ambled aimlessly through the markets. For all the talk of glitz, there was a surprising amount of poverty to be found, and it didn’t take much searching to find it.

As my husband and I rode into Marrakech from the airport, our taxi driver slowed to point out lush parks, camels lounging near a street corner, and flowerbeds filled with blooming rosebushes surrounding the city’s pink, mud-brick walls. Driving us as close to our riad as the streets would allow, the driver stopped just outside the walls of the Medina. Before expelling us onto the busy street, the driver harangued a loitering young Moroccan to take us the rest of the way to our riad. With a wave and a hint of a smirk, he wished us luck, “Bienvenue à Marrakech!”

Welcomed we were into the Medina’s chaotic maze of dusty streets and alleys. We hurried to keep up with our fleet-footed guide, while avoiding the constant barrage of roaring motorbikes that spewed clouds of black exhaust in our faces as they raced by. Abruptly, our moody guide stopped outside an unmarked, nondescript door and rang the doorbell. While waiting for the door to open, I pressed myself up against the wall to avoid getting run over by a passing cart pulled by a very sad-looking mule. Was this the authentic Moroccan experience I had read about?

Later that evening, we made our way to the expansive main square, the Djemma el-Fna. A heady aroma of mint, spices and grilled meats filled the air as we wandered past the mesmerizing mix of snake charmers, henna artists, chained monkeys, and a curious old man sitting behind a card table covered with a giant mound of human teeth. With the pink minaret of the Koutoubia mosque standing guard nearby, there was no chance of relaxing on this square with an evening aperitivo.

Deciding against a dinner of steamed snails, we instead took a 10-minute stroll to La Maison Arabe. There we settled into plush seats for what would be the only decent meal of our trip. The orange soup starter tasted curiously like a warm, melted Creamsicle, but was followed by a succulent lamb tagine with sweet figs and walnuts. For dessert, the pastilla — a layered pastry with cream and almonds — had a strange aftertaste, but the round of complimentary raspberry-flavored cold chocolate drinks washed that right away.

Little did we know then that the rest of our dinners would consist of (at best) bland couscous with soggy vegetables and (at worst) a neon-green, fuzzy-looking chicken tagine. On the walk back to the riad after dinner, we passed packs of young men wandering the streets (in search of what?). Having lived in New York, I am naturally wary of ambling through dark alleys late at night, particularly when they are filled with packs of strapping young men. But despite the seemingly sketchy surroundings, we felt completely safe. Marrakech was full of surprises, and this was just one of many.

The following morning, Marrakech’s souqs enticed me to suspend my long-held rule of not shopping in markets. Digging through bins with crowds of pushy strangers isn’t my idea of a pleasant shopping experience. But the souqs were more than a simple market. This was a fantastical Berber super-mall. Every inch of the winding, covered alleys was crammed with tiny shops brimming with exotic treasures waiting to be discovered.

Unfortunately, most of these finds would not fit in my suitcase. So it was with much disappointment that I had to pass on hand-woven rugs, intricately-painted ceramic bowls, embroidered pillows, and stunning iron lanterns that made even a glaring halogen bulb emit light like thousands of tiny, twinkling stars. To lift my spirits, I snapped up a pair of embossed yellow leather slippers and a Berber-chic embroidered linen djellaba. But when the bargaining began to feel more like bullying, we moved on to see some sights.

After hours spent admiring the impressive geometrical mosaics, inlaid woodwork and intricate carvings of Moroccan artisans at Marrakech’s palaces and the awesome Ali Ben Youssef Medersa — a Quranic school dating back to the fourteenth century — we were ready to take a break from the Medina’s bustle. So we hailed a taxi for the Jardin Majorelle, private gardens located outside the city walls. Upon arriving at the gardens, our enterprising taxi driver tried to triple the agreed-upon price, a foreseeable annoyance given the “broken meter.”

But the noise and stress of Marrakech immediately disappeared the moment we stepped inside the gardens’ guarded gate. The whimsical gardens and striking blue Art Deco villa, fashion designer Yves Saint Laurent’s gift to the city, were a refreshing visual oasis in the middle of a crumbling, dusty pink city. Cobalt blue, neon yellow, and sage green flowerpots lined the walkways that wound past ponds, cacti and exotic flora. As the afternoon calls to prayer began to echo over the city, I sank into a bench and never wanted to leave.

But we had a list of supposed hot spots to visit, including a cool boutique/art gallery and a new restaurant/bar that had been touted in nearly every article recently written about the city. If Marrakech were truly the next St. Tropez, we would soon find out.

After wandering in circles for nearly an hour, we finally found our way to Riad Tamsna, hidden down two dark alleys and then up an unmarked stairwell. The riad-cum-café-cum-gallery-cum-boutique was a guidebook and New York Times favorite, but when we finally found it, it was completely deserted save for the surprised proprietress. We briefly glanced at the half dozen uninspiring paintings, the thin racks of clothes, and the empty tables before awkwardly excusing ourselves from our hovering hostess.

Our next attempt was even less fruitful. We searched in vain without ever finding Le Foundouk, a restaurant/bar that supposedly had dark, edgy atmosphere galore. In the winding Medina, with unnamed streets and unmarked doors, finding our way brought back bad memories of being hopelessly lost in Venice’s circular maze of side streets and canals. Since the Medina hot spots were impossibly hidden (or empty), and leaving the Medina would have involved long walks through unlit, unfamiliar alleys and the hassle of “broken-meter” taxis, we resigned ourselves to not finding the hip side of Marrakech.

Concluding that “Marrakech: the new St. Tropez” existed only in the land of far-flung luxury resorts and chauffeured cars, we returned to our quiet riad, disappointingly sober and hungry. But from the riad‘s rooftop patio, the snow-capped Atlas Mountains beckoned in the distance. Early the next morning, we decided to spend our last day in Morocco exploring them.

After a two-hour drive through the desert, we arrived in the village of Imlil, at the foot of the Jebel Toubkal, the highest peak in northern Africa. There we began a hike up the steep slopes with our native guide, Hassan. Along the way, we often yielded the path to passing donkeys carrying giant sacks of food and goods from the town to outlying villages. “A Berber four-by-four,” Hassan joked, gesturing at a passing donkey saddled with dozens of bottles of water.

High above a rushing river, clusters of simple, mud-brick houses clung to the hillside. Between the crumbling buildings, women in heavy skirts and colorful headscarves carried babies on their backs while hanging laundry and tending to a couple of grazing cows. Chickens roamed freely between the small houses while young children played in the narrow alleys. Old men in worn djellabas, their entire lives etched deeply on their tanned faces, trudged slowly between villages on vertigo-inducing paths. Yet even in these astonishingly basic conditions, each person we passed greeted us with a warm, welcoming smile.

With a healthy dose of fresh air and a new perspective on the world, we were soon speeding back toward the bustle of Marrakech. What we discovered in Morocco was not exactly what we thought we would find. But the most valuable travel experiences often have nothing to do with fantastic cuisine, posh hotels or breathtaking sights. For me, a new outlook on my own life was the most valuable thing I found in Morocco. And that was unexpected.

The airport is located six kilometers from Marrakech; taxis can be found outside the terminal. First-time visitors staying in the Medina are advised to have their riad arrange an airport transfer.

Since cars are not permitted inside the city walls, the riad will typically enlist a guide to walk you (and your luggage) the rest of the way to its entrance.

For more information about riads, ilove-marrakech.com has reliable local ratings and riadsmorocco.com has photos and maps. When booking, contacting the riad directly will often yield a lower rate than what is listed online.

Excursions to the Atlas Mountains can be arranged through riads or in advance through a tour company. Guides in Imlil can be hired for short and long hikes that can include stops in the outlying towns for mint tea. A guide should charge about 300 dirhams (about €27 at 11 dirhams to the euro) for a two-hour hike for two people.

While many Marrakchis speak at least some English, you will surely encounter those who do not. French is the most widely spoken Western language, so learn a few phrases before you go.