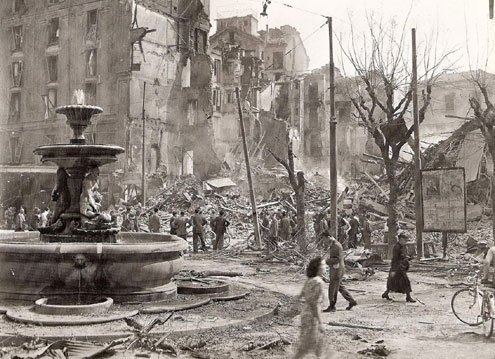 Piazza Fontana after a 1943 Allied raid.
I

n an out of the way corner of Milan’s vast Parco Nord, far from any path and hidden by shrubbery, is a stairway leading underground.

With a small group of visitors, I follow a guide down these stairs. The temperature drops as we descend. Lights dim. Children quiet down and cling to their parents. On a wall, painted arrows — red and white on a black background – direct us to turn left at the junction into a long tunnel, with wood benches along both sides.

We walk past other tunnels, leading left or right into blackness. We pass two small bathrooms with concrete toilets. In a side room children have made chalk drawings on the walls — colorful houses, people running and explosions in the sky.

We turn into a tunnel where candles illuminate black and white photographs showing destroyed buildings, piles of rubble and the skeletal remains of a bombed airplane hangar. An audiotape plays sounds of whistling missiles, explosions and Mussolini’s voice. The walls are wet here. Signs say: NO SMOKING and MOVE AS LITTLE AS POSSIBLE.

We are in an air raid shelter.

Parco Nord extends for 600 hectares (nearly 1,500 acres), among six municipal districts on the north side of Milan, one of the most densely urbanized areas of Europe. It was created on the bombed out ruins of what used to be the Breda industry.

Breda was founded in 1886 by the engineer Ernesto Breda. In the 20th century, it gained importance for the construction of trains, aircraft, trucks and industrial and agricultural machinery.

In World War II, Breda produced warplanes for the 5th division of the Italian Air Force. Along with Falck, Pirelli and other industries located in the northern part of the city, it became a military target. After heavy Allied bombing in late 1942, the company built air raid shelters for its workers. These shelters were not deep enough to withstand a direct hit, but they did offer protection from flying dirt and debris and from the tremendous blasts of air. Tunnels interconnected them.

On April 30, 1944, American bombs destroyed the Breda factory. One of the tunnels suffered a direct hit. Only five people died — all of them watchmen — because the attack came on a Sunday when the factory was closed. The network of tunnels was rediscovered in 1990.

Milan is full of these tunnels. In 1936-37, laws were passed requiring new buildings to have basement bomb shelters. Those that held more than 30 people were divided into cells, which could be blocked off if necessary. People were afraid of poison gas, which had been used extensively in World War I, so the new shelters were equipped with gates that could close hermetically. They were called ricoveri casalinghi (household shelters). Those built underneath factories were called ricoveri collettivi (collective shelters). None of them were completely safe.

Most public shelters were located underneath schools. Others were dug in courtyards or gardens.

After June 10, 1940, in every building, a basement area was sectioned off and reinforced with wood beams. These shelters, which required the use of gas masks, were called ricoveri di fortuna or ricoveri di circostanza (basically shelters found by happenstance or dictated by immediate circumstances). They were presided over by trained sentinelle, who maintained order and gave directions. They were linked through a web of tunnels with many entrances, marked by red and white arrows painted on the buildings.

In 1942, the building of public bomb shelters began. Galleria del Segrato, beneath the Milan cathedral, could hold thousands of people.

In the Breda shelter, we listen to an old man talk about his experiences as a Resistance fighter. He describes being bombed by the Americans. He says it was done without regard for civilians or monuments. His eyes tear up when he remembers it. His fists clench.

Another man recalls reconnaissance planes they called “Pippo.” Residents knew that within 24 hours of sighting such a reconnaissance plane, bombers would arrive. The man sings a popular wartime song, which ridicules these planes, in a defeated country’s final effort at bella figura:

That when he passes the whole city laughs.

He thinks himself handsome as a god

When I first came to Milan in 1970, the suffering of World War II was still visible. War-blackened wreckages stood like open wounds among residential buildings.

Now, nothing remains but old peoples’ memories and the bitterness they still carry within, directed mostly towards other Italians. In German-occupied Italy, World War II evolved into a civil war, ultimately giving rise to today’s left and right political factions.

Milan has been rebuilt, most bomb shelters filled in or forgotten, the arrows painted over. It’s up to children and grandchildren now to recover the memories and try to make sense of them. As a first step, the 20 or so rediscovered shelters, and even their arrows, are being restored.