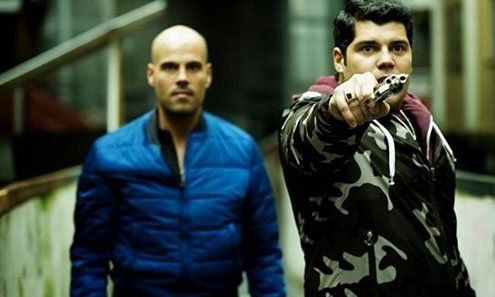 #8220;Gomorra,” the three-year-old Italian television crime drama based on Roberto Saviano’s 2009 book about the Naples organized crime group, the Camorra, recently aired to American audiences at the Sundance Festival.

The Economist gave the series a rave review, comparing it in spirit to “The Sopranos” and “The Wire,” American-made dramas hailed as two of the grittiest crime shows ever made. It also repeated the romantic, misinformed and dangerous notion that the Camorra is just another “highly successful” international business.

Of course, like any commercial enterprise, the Camorra — and its sister groups the Sicilian Cosa Nostra and the Calabrian ‘ndrangheta — monitors the movement of global markets, checking the competition while managing relationships with regulatory authorities.

But before being sucked in by the series, viewers should know the crucial differences between Italian organized crime groups and successful businesses, which the gushing British review forgot — or wasn’t aware enough — to mention.

First, money and the quest for profitability are not what motivate these groups. Power does. Or as the sanitized version of southern Italian proverb goes: “Being in command is better than sex.”

The economic interests of crime bosses may be global, but their sense of personal worth and their power base remains astonishingly local. Italian judicial authorities were surprised to learn from wiretaps just how angry bosses became when the state confiscated even low value property. Holding that property was a way of showing locals who controls what.

Second, no matter their structure — the Cosa Nostra’s military hierarchy or the cellular groupings of the ‘ndrangheta — all Italian crime groups use family as a model. And it’s not “Modern Family.” It is a pre-Enlightenment, feudal family based on blood ties and dogmatism. Members are either in or they’re out. The family balances a “paternal” element of fear and obedience with a “maternal” element of protection and security. The Economist may claim that the Camorra rewards innovation, but clan interests ultimately override individual identity and autonomous thinking. Trust is not an option, even in the most intimate circles.

Outside Mafia-land, businesses are just businesses. Inside Mafia-land, there’s an intermingling of the personal and the “professional,” same with “investors” and “managers.” Relationships are based on collusion or coercion rather than choice or collaboration. Violence and the threat of violence glue it all together.Failure to conform when choosing a spouse, hiring an employee or electing an official can trigger such violence. The lack of trust further limits basic human choices.

Several years ago Don Peppino, a (now deceased) Calabria priest told me that anti-Mafia educators like him had to teach elementary school children that tiny gestures such as accepting a free coffee or ice cream from a barista or asking a “friend” to locate a stolen motor-cycle was the first link in a chain of escalating obligations that must eventually be repaid.

Although territorial control is fundamental, Italian criminal organizations do not use their power, money and political connections to improve local schools, roads or hospitals. On the contrary. The regions where organized crime is strongest and richest are Italy’s poorest and most underserved. This is by design. Health costs are notoriously higher in Italy’s south. Public works, such as a project to extend the southern highway to Reggio Calabria, are burdened with huge delays and come with an estimated three percent “Mafia tax.”

Such costs and inefficiencies demoralize citizens and create dependency. What are rights anyplace else, Mafia control turns into favors. In Mafia-land, access to public services such as health care or building permits are monitored and run through personal networks of relationships and owed favors. The Economist chooses to see the Camorra’s cash outlays to the families of “employees” who are killed or jailed as a form of “corporate responsibility.” In fact, it is yet another, barely-masked form of coercion.

Instead of improving things at home, crime organizations prefer to invest their substantial profits in sectors and regions that offer better returns than downtrodden southern Italy. Northern Italian real estate and construction or restaurants are favorites. Or the money stays dirty, financing arms or human trafficking and spreading the misery across the globe.

The Economist may think the Camorra is “innovative,” but since Italian organized crime moved into drugs in the 1970s, their core businesses have changed little. Extortion and usury are still big earners. Recent additions such as human trafficking merely take advantage of existing “infrastructures” of drug-smuggling and prostitution. There is one new business: hazardous waste disposal. Since the 1980s, toxic waste from across Europe has poisoned the Italian countryside. My Neapolitan friends check the mozzarella I’m serving at dinner to be sure it originates in a Camorra-free (which is to say toxin free) zone.

What about organized crime’s “legitimate businesses”? An Italian court administrator familiar with them told me that many are nightmarishly acquired through extortion. Reorganizing or closing them after confiscation harms innocent employees. Lacking the discipline of creditors or shareholders (or even the need to be profitable), they’re often badly run. Family ties are not a business plan. If you’ve ever wondered how some Italian restaurants or hotels are always empty but never go out of business, now you know.

Then there’s The Economist‘s suggestion that the Camorra — like other crime organizations — exists to fill voids created by Italy’s corrupt politics or unfriendly business climate. The magazine cites Italy’s stagnant economy and “growth-killing labor rules.” Perpetuating this tawdry myth is as unfair as accusing a cancer patient of not acting like a one with a broken arm.

A final word: if you were thinking of watching “Gomorra” to learn Italian, think again. The language its characters speak, often indecipherably, is Neapolitan dialect.