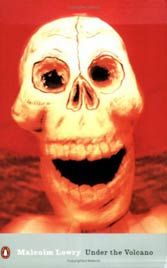 What Lowry did no one has done better: take the condition of Hell’s gate alcoholism and give it a credible contemporary framework. This isn’t the same as being an alcoholic and surviving to concoct a semi-fictional tale about the woes of going under. Instead, it is the visionary narration of despair as if witnessed from close-up, lucidly, a cast of characters at the ready and a typewriter to make them act and react.

Geoffrey Firmin is the British Consul in Quauhnahuac, a Mexican Sierra Madre town. He’s a dissipated and haunted drunk. Neither his half-brother (Hugh) nor his estranged wife (Yvonne), present on the Day of the Dead, November 2, 1938, can yank him — though they try — from his advancing precipice, “this stupid darkness” and “nights the color of grey hair.” Yvonne’s wish for reconciliation foredoomed. All is fated, badly. All is displaced, since the characters are transcendental exiles (“Why are we here, they seemed to say,” says Yvonne, looking at the stars, “in the wrong place, and all the wrong shape, so far away, so far, so far away from home? From what home?”)

But the Consul is at home in this decay. To him, forgiveness is out of the question and “the very bottom of one’s being…” luminous. Around him are two active volcanoes, Popocatepetl and Iztaccihuatl, percolators of “desolate fecundity.” He revels in the lead-up to his own termination, with the narrative beginning after his death. But this is not a morbid novel. On the contrary, Lowry, highly political (“a turkey looks like Neville Chamberlain”) and anti-Fascist, has an actual and allegorical grasp of evil. The Consul wants out of perdition but can’t see straight; and to be sober means accepting the horrors of human behavior, which he cannot or will not do (the book, which covers a day in the Consul’s life, was written in 1947, just after the war).

Lowry, like Dylan Thomas, didn’t survive his drinking. Nor was he particularly successful with his other writing. But when writing to his publisher, Jonathan Cape, fervently rejecting proposed revisions, he rightly identified his manuscript as something special: “Whether it sells or not seems to me either way a risk. But there is something about the destiny of the creation of the book that seems to tell me it just might go on selling a very long time.” He was right. This is among the dozen or so major novels of the 20th century: not easy, not simple, deeply sad, and memorable in the extreme.