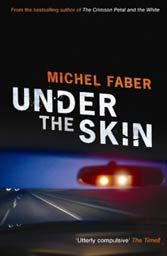 Michel Faber is a Dutch-Aussie who lives in the Scottish highlands. Modern fiction has few authentically original voices: Faber is one, uniquely so, and his first full-length novel proved it the most disturbing of ways.

His narrator is Isserly, an anthropomorphic alien who prowls Scottish highways and back roads seeking human specimens, known to her kind as vodsels. She hauls in brutes and students, teachers and lowlifes, so long as their meat makes a “reasonable impression.” All are attracted by her peculiar small car, her odd looks (“half ‘Baywatch’ babe, half little old lady”) and — little do they know — manufactured breasts. Many think they might be onto something sexual (“Women don’t dress like that … unless they want a fuck,” one hitcher tells himself.) They’re wrong. And the nature and dimension of the wrongness is the core of the book. Isserly is in fact not a babe but a collector and a fattener of vodsels. She is rational, meticulous, has little fondness for the tidbit “babble” of television, has no special fondness for humans, or her work — which has been all but forced on her by the politics of her planet and her middling status in its corporate hierarchy (“… she had a difficult job to do, and no-one but she could do it.”)

For Faber, Isserly’s gender is means to an end. He’s the stenographer of an eros twisted beyond repair. But his lurid subversion of the flesh-trade paradigm plays out seamlessly. He diagrams Isserly’s savage drudgery in a straight-faced, aweless way, gradually developing a parallel realm so effervescent that even menace glows.

Along the way, horror and absurdity fuse. Empathy is absent — until the hoofed Isserly, the Nessie of Faber’s extraterrestrial Loch, intervenes with something of a moral punchline. Yes, Faber at times overplays his narrative hand, dwelling on alien behavior and values in an effort to forage for Isserly’s underlying humanity. But if you want troubling, this is troubling.