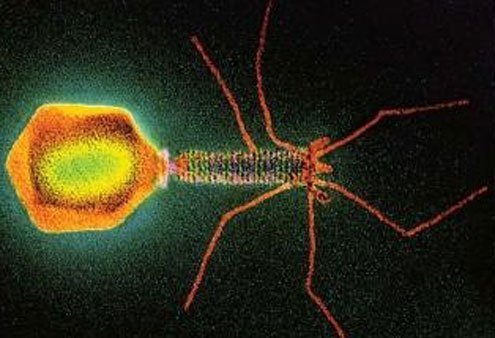 A bacteriophage, seen here under an electron microscope, is a small and space age-looking virus that infects bacteria.
I

mages of a simple virus called a bacteriophage remind me of a Cold War-era spacecraft programmed to land on the moon. And that’s what a bacteriophage is: a tiny, nonliving but organic robot that seeks alien landscapes to colonize. Once it touches down, the robot creakily starts its rounds, squats and soon injects its genetic material.

That’s when the show begins. The robot and its foreign genetic material swiftly revise the workings of the host’s inner machinery, cloning new organic robots at a rate that makes rabbits look like tortoises. The reproduction produces an explosion, releasing the new clones to wreak further intracellular havoc.

Sounds sinister, right? It is, if you happen to be on the colonized end. Though bacteriophage viruses infect only bacteria, humans have their own set of viruses: Polio, influenza, smallpox, human immunodeficiency virus (HIV), herpes, Hantavirus and rabies.

Vaccines that introduce an inactive “sleeper” form of the virus into the body as a defense mechanism have helped eradicated a number of dangerous viruses, including smallpox. A vaccine primes the system to release roving anti-viral SWAT teams to combat exposure. Once a virus stops its public circulation, vaccines are no longer necessary. Some viruses, rabies for example, can be stopped, but only if caught early.

Others require what amounts to regular surveillance. Every year, flu shots reduce influenza’s winter reach. The vaccine must be crafted annually because the virus works to evade detection and mutates rapidly. HIV behaves similarly, but on a faster and more complex level. This explains why current treatment for HIV inevitably fails. The virus checks into a closet, changes from a fedora to a beret, and gets away with murder.

Viruses share a common core of genetic material, either DNA or the related molecule, RNA and a protein coat called a “capsid” that protects the interior genetic material. All viruses are hijackers. They infect cells by delivering their viral genome (RNA or DNA) into the host cell, using the host’s own energy and equipment to make more viruses that will infect more host cells.

But their forms are distinct. They differ in size — anywhere from 20 nanometers (0.0000008 inch) to 500 nanometers in diameter. They often look like spheres, actually icosahedral polygons with 20 equilateral triangle faces; or filaments. Incubation periods — time from infection to symptom onset — range from days (Ebola) to decades (HIV). Natural selection favors mild viruses that do not destroy the host (since killing the host is suicide for the virus).

Memorable exceptions to the suicide “rule” include HIV, Hantavirus, rabies, and Ebola. Some viruses possess “tropism,” an affinity for certain cell types. Hepatitis B likes liver cells. Viruses can also be picky about temperature or pH conditions. Some thrive anywhere. HIV and Ebola are wolves in sheep’s clothing. They cleverly generate an exterior “envelope” crafted from the host cell’s own outside coating. Viruses sicken in different ways. In some cases, viral gene products are immediately toxic to the host cell. In others, the hijacking process causes damage by modifying the host cell’s functions.

Usually, however, it’s the body’s own immune response that wreaks much of the havoc. In trying to fend off a virus, immune cells called T lymphocytes seek and destroy infected host cells. This can amount to friendly fire, since the cells targeted for destruction may play critical roles in the body. A robust immune response can also cause inflammation that inadvertently damages vital organs.

With viruses subjugating our own cellular machinery, the problem is that of shutting down the virus without shutting down the host. Creating vaccines and effective treatment depends on a few vital factors: knowing how a virus enters the body; understanding how it replicates, spreads, and survives; identifying how it leaves.

Viruses are miniature bio-terrorists, intercellular parasites with big egos. Most are wannabes, or “sub-clinical”; the body stops them before symptoms develop. Society tends to focus on the more gruesomely effective ones.

These days, the gruesome one goes by the name Ebola. The antithesis of sub-clinical, Ebola ravages the body with fever, malaise, nausea, vomiting, diarrhea, edema, hemorrhage, and coma, which together often culminate in death.

But let’s put Ebola in historical perspective. Estimates suggest up to 50 million people died in the 1918-1919 Spanish Flu pandemic. According to the World Health Organization, some 1.6 million people died from AIDS, the end-stage manifestation of HIV, in 2011, down from 2.3 million in 2005. The U.S. Centers for Disease Control and Prevention say the 2014 Ebola outbreak has so far left nearly 5,000 dead, almost exclusively in three West African countries (the disease was first isolated in East Africa in the mid-1970s).

But Ebola is unsettling because of its virulence and mortality rate, and its ability to make global leaps. So far, there is no clear way to stop it. Current animal disease models are imperfect. Ebola’s “reservoir species” — the animals that carry the virus but don’t get sick — is still unknown. With infections limited to African villages, scientists have had little opportunity to study Ebola and develop effective (and proven) treatments or vaccines. Though labs are at work on experimental treatments, most Ebola patients can expect only symptomatic and supportive care such as intravenous fluids and pain medication. Lack of knowledge hinders medical progress. Lack of education and understanding, coupled with hysteria, hinders prevention and containment.

Yes, Ebola is scary. Yes, it causes horrible disease. But it is hardly the first scary virus to take center stage. The Bubonic Plague savaged pre-enlightened Europe. “Know thy enemy,” wrote Sun Zhu in his ancient war manual. With Ebola, that knowing process has just begun.