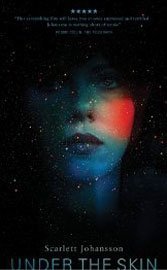 Ah, Scotland, with its moors, mists, rocky shorelines, and highways that snake toward nowhere. Add to that a predatory alien in search of edible treats for her celestial kitchen. Novelist Michael Faber came up with that wildly imaginative conceit in the year 2000, and now, after a long (and apparently tormented) genesis, comes direct Jonathan Glazer peculiar adaptation. Faber’s alien was Isserley, a jaggedly assembled human woman driving through north Scotland picking up male hitchhikers on behalf of her bestial corporate bosses. Isserley looked odd and drove an odd car. Self-aware if awkward, she conversed with her victims.

Glazer takes another tack. He casts stunning Scarlett Johansson as Isserley (though she’s never named), gives her a white van, and mystifies her task by adding suggestive strobes, pulsating lights and increasing purposelessness. What he doesn’t give her is the “why?” of her existence, which is the subject of Glazer’s static move. To be sure, Johansson behaves strangely enough but Glazer’s more ethereal approach dispenses with story development and tension, depending instead on Scarlett’s looks and Scottish atmosphere. While Faber gave barely human Isserley a strange if awful kind of wryness, Glazier — who made the ferociously talkative “Sexy Beast” — gives his creation nothing at all, making his alien into lost and persecuted intruder coming tediously into self-awareness. This is sci-fi horror with snatches of great beauty and mesmerizing strangeness but ultimately with no claim to aim. Johansson (tasked only one scene that contains substantive dialogue) does her extraterrestrial part, but the whole — essentially an exercise in visual aesthetics — never lifts off. Unsettling, yes; compelling, no.