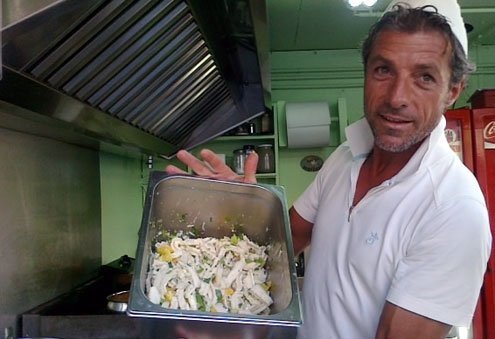 uscan cuisine has become somewhat of a cliché. The tourist-rich region once coveted for its art and culture has put pots and pans well ahead museums and cathedrals. Cooking classes and market tours are booming. Tuscan wine and olive oil farms are sightseeing magnets, surpassing Medieval and Renaissance landmarks. Tuscan food fads are growing as never before.

It started decades ago with Vivoli, a Florentine gelato joint that gradually began vying with Michelangelo’s David and the Uffizi for tourist traffic. Guidebooks began putting it on the same page as Giotto’s bell tower and the Bronze Doors of the Duomo. David suddenly held a gelato.

In the 1970s, an inconspicuous Florence wine seller whose business occupied what used to be part of the stables of the Palazzo Rucellai (designed by Leon Battista Alberti) began serving a few home-style dishes in its cantina. The place was dubbed Il Latini and evolved into a food-lover’s hub. A splendid restaurant in its time, it fell prey to a badly-managed family feud and eventually became just another tourist machine, its charm and quality traditional menu lost to the flood of new guests.

In came the Supertuscans, A breed of elite wines made for every palate (with little attention paid to European Union wine designation). They went by names such as Sassicaia, Ornellaia and Tignanello, to name just a few. International acclaim and upscale prices soon followed. So much for vino da tavola.

Regional cheeses such as Pecorino Toscano, Marzolino and Caciotta Senese, as well as salumi made from the local Cinta Senese pig, gradually became known outside the region. Hyper-local dishes such as ribollita and zuppa di faro traveled to Manhattan and it wasn’t long before chef Mario Batali’s father was curing guanciale in a Seattle shop.

But not all of Tuscany’s cooking secrets are commonplace. Some are all but unknown, except to insiders. Here’s my own short-list.

Lampredotto is unlikely to make it into most cookbooks. It’s the abomasum, or fourth and final stomach compartment of grazing mammals boiled in seasoned tomato sauce and served chopped as a sandwich filler in unsalted rolls, typical Tuscan street food. A tripe snack, it has plenty of brethren, including musetto, fried brains; boiled pork snout; chopped nervetti, and bovine tongue salads. They’re sold at typical Florentine street-side kiosks known as trippai.

The rolling hills and bell towers of Chianti tend to knock seafood out of the picture. They shouldn’t. Tuscany has kilometers of sandy and rocky shorelines that stretch between the Maremma territories and the seafront marble quarries of Carrara. Argentario, Elba, and the VIP hangouts at Versilia aren’t on most tourist agendas. Nor are fish dishes.

Cacciucco, which emerged from Livorno (Leghorn in English), is one of many fish stews popular along the Tyrrhenian Sea coast. According to Syrian-born Livorno historian Paolo Zalum, the stew was the idea of an ancient lighthouse watchman. After the Florentine Republic barred the use of oil for fish frying inside lighthouse quarters (needed instead to fuel the beacon), the watchman put together a variety of catches and boiled them into a soup. Cacciucco uses very little olive oil in its preparation.

In Livorno, a good cacciucco is said to require at least five kinds of fish, equal to the number of “Cs” in the dish’s name. But if five is the minimum, “the more the merrier” is the rule. Ancient cacciucco recipes call for 13 kinds, including the moray eel (whose fatty flesh donates character and flavor), rockfish, sea robin, dogfish, squid, octopus, mantis shrimp (aka prawn killers), prawns and crab. Local angler, sole, catfish, drum, red mullet, weever, gurnard, and mackerel can also make appearances.

The ink sacs and bony parts of the octopi should be removed; the crab and prawns left whole, and the white fish eviscerated and scaled, with however many taste-rendering heads left whole.

Depending on how many people you’re feeding, and the fish size, you may want to calculate two small fish varieties per person, three squid per person, two or three prawns, and so on. Again, variety is the key.

Another low-profile Tuscan specialty is zolfini beans. Delicate, small, and roundish, these rare yellow beans usually fall apart before even reaching your lips. Cultivation of zolfini (zolfo means sulfur in English) is restricted to the narrow strips of sandy soil of the Setteponti road shoulder that connects Arezzo to Florence in the Pratomagno area.

At risk of extinction, zolfini survived thanks to an IGP certificate (Indicazione Geografica Protetta), a government category that recognizes local products worth preserving. The annual yield is still very low — around 20 tons — with the beans cultivated only in elevated parts of Pratomagno.

Zolfini have a pale yellow sulfur-like hue. They’re also referred to as fagiolo del cento (the hundred’s bean) because they’re commonly sowed on the hundredth day of the year.

Cooked zolfini have a distinctive buttery texture. The absence of hull, or outer covering, makes them easier to digest. Their unique aroma is reminiscent of freshly mowed lawn and morning dew.

Below, you’ll find my recipe for cacciucco the Livorno fish specialty, and two for cooking zolfini — once again, you’ll have to work to find them. Both of these dishes will reward you with another side of Tuscany.