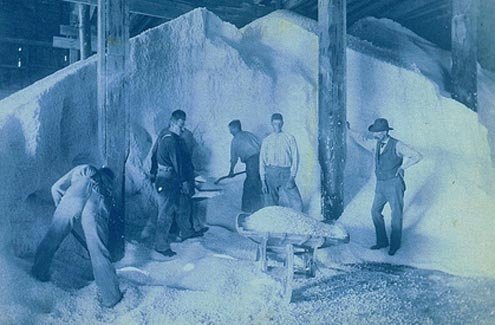 I have come to Placuna, a footnote in most guidebooks, to seek the ... spappa.
M

ornings are best in Placuna. Arriving from the north aboard the divieto, the slowest of all the trains (one departure only, at dawn, through the fertile Caccapotenza Valley), the sun spreads rampant rays on the rows of swaying monk-trees. Near the station, stucco-faced washerwomen gingerly fondle fussy sheep before shimmying off to mine the local salt.

If a single word — poignant and piquant — can alone speak for a region, salt is that word.

Abundant. Ample. Around. Here, they call it spappa.

In the gravely dialect derived, legend has it, from the Latin-speaking engravers who once frolicked and drowned by the thousands in these shimmering Mediterranean seas, spappa comes out cluttered and nasally, in two parts: SPAH-pah.

Some sneeze, some do not. But tradition remains intact.

So I have come to Placuna, a footnote in most guidebooks, to see the spappa, and the people who make their lives from its annually abundant harvests. For centuries, before tiny Placuna was incorporated as a pasto comunale, or an Officially Eaten Land, the harvesting of spappa was limited to the employees of dukes (dooki) and counts (urli) who rowed diligently back and forth from Constantinople and Rome, pausing from time to time in Rhodes or Crete to purchase bubbas, or dancing sandals, from the crippled husbands of midget peasant girls.

Legend says these visitors also stopped long enough to recruit man-serfs (known as malstracettini) who were humored into learning classic Placunan “home ways,” called Fai-Lo-Tu abbreviated as “Fu”. Though most of these laughing migrants turned to fang and bat farming, some manufactured sawdust, gradually creating and developing razzacuscini (perky pillows), the kind still purchased in large numbers by insomniac government ministers and their checker-playing mistresses.

At the train station (trappa), Re Giuseppe meets me. He’s a small-boned man with a nervously alert mouth (typical of Placuna). Once an industrialist and firefighter in Milan, he has come home to tend to his aged cat, Rai.

Re Giuseppe’s face is rugged tribute to his father and grandfather, both crampii spappali, or salt counts. The additional “I” in crampii, Re Giuseppe explains while deftly petting Rai’s damaged nose, is yet another local deference to enduring medieval traditions. “They were, in those days, very,” says Re Giuseppe. “Very, molto, and it influence them away from the boredom of the time they were in. They were working people and with their legs so much was accomplished. Mostly, odes. And my father was in charge of how the muscles worked, and the sea also. I have bones.”

This folkloric eloquence and precision of language is commonplace in Italy’s vivid South. As the Czech-Scottish travel writer Gordon Milos-Bracchi (who visited here regularly in the 1950s) observed in his celebrated essay, Parlami di Spa-Pa-Pa, “The coasts have tasty people, and they speak for themselves.”

Not only for themselves, but also for their industry — and always with lucid peasant verve.

“We have tradition for the spice of the thing in heat, always,” says Re Giuseppe, who owns 450 hectares of land 12 kilometers north of the brabba solare, or Babble Belt. The “belt” was reserved for the most ardent of the salt-farmers, most of them lapsed Catholic missionaries who emerged suddenly from immense lime caves situated around the parish church at Mistaluccio. No one knows why the otherwise solemn missionaries entered the caves in the first place, though the aroma of lost goats is suspected.

“Oh, My, God,” says Re Giuseppe, recounting aspects of the story with the confident calm of a man at home with himself. “An excellent morsel” is how he describes the land around him. He then gargles solemnly.

Mistaluccio has its own history. The 11th century hillside town is where the cheese farmer and auctioneer M’Pione, a former player on the town’s amateur soccer team, had a vision of a giant salt-shaker rising from the town square. “Goal!” M’Pione, apparently cried out in the throes of his vision: This, at least, is how local schoolchildren, known as i magaris, tell it.

The chaste M’Pione, also a retired male model, would later sculpt the first of many miniature popes and small religious icons this region produced for decades (many of them depicting the ears and genitalia of famous cardinals). The icon trade boomed until 1964, when, as rabbit farmer Re Giuseppe explains tersely, “They broke.”

The word “Later,” or doppo (pronounced DOH-po), is prevalent in the region and to express affection when parting. Nowhere is it more than prevalent than in Placuna, where dialect is fluid. The police station, for example, is also known as the doppo, as is the tiny hospital, and, amusingly, the hereafter (e.g., “I will see you in the doppo…”). The word has whimsical versatility, evincing a mix of pleasure and rigor, indulgence and realism, fish and meat.

Inflection can occasionally result in misunderstanding, however. The local school is also known as the doppo, and its students as the dopos or, less kindly, i dopi. The benign phrase “Io te doppo,” which means simple “later,” can be mistaken for “I am a foolish schoolboy” if only a single “p” is pronounced. Poor diction is said to have contributed to blood feuds between local harvesters trying to communicate with crampii, or union officials, called uppioni, or uppers (from a phrase once used to refer to boiling water). In 1954, harvester Brabba, seeking a “later” appointment with union official Malafiga, slurred his words, suggesting Malafiga was “a truant infant.” The offended Malafiga damaged 30 regional water pipes.

“Sometimes that is true,” says Mauco, a teenager who works in B&C, the shoe and food emporium in the center of Placuna. “Sometimes this is true,” he clarifies, picking cured syllables to make his point. “Ask the contessa. …”

I do. She is a sultry woman of about 60 who, according to town myth, lived 13 years with a small male goat (known here as a rambo) in an unfurnished cave outside Placuna. She turned to grotto life (cavavita) after her lover spurned her, making off with her life savings to purchase racing dogs in Turin before starting a bribe consultancy in Sicily.

“Do you like olive oil?” she asks me, coyly pouring a flask of the local variety, oddly known as parcella, or commission. “I rent many caves,” she whispers, offering me a deal before narrating a dopo story.

Once, she says, a sign posted by local youth (it read DOPO CRAMPII PLACONE) led to a misunderstanding that resulted in several dozen farm animals arriving by road from the nearby town of Spavaldo (which since 1930 has manufactured pencils exported to Albania).

Legend has it that Spavaldo Mayor Mo Dammo, visiting Placuna during a quarrel between uppioni and crampii, saw the sign and mistook dopo for doppo. Fearing bodily injury, Mo Dammo had some of his town’s lamb trucked over as to placate Placuna’s authorities, who failed to understand the significance of the gesture but welcomed the braying animals nonetheless. A holy square was inaugurated to celebrate their arrival, Piazza mi’Nello, swiftly consecrated by Mo Magari, the then-Bishop of Spavaldo. When the lamb continued braying, they were slaughtered and the truck confiscated. Both were later cooked.

“What is true is true,” says Mo Dammo of the incident in his private papers. “Funny,” he quips elsewhere.

As a result of the legendary lamb, dining in Placuna is an unusual experience.

It begins at dusk, when “Bettina,” Placuna’s lone eatery, lights 13 votive candles to herald the arrival of the first course. “Bettina,” which signifies “What?” in local dialect, is owned and managed by a woman called Bettina. Once a bustling Renaissance diner run by three epic poets tied to the local ermine trade, Bettina purchased and transformed “Bettina” in 1959 thanks to the support of her innovative and senile father Bo, who encouraged her by repeating the word “Yes.”

“Ah,” says Bettina concisely, summing up the early days of the eatery and as well as her tastes. “Yes to knives,” she continues. Though Bettina won’t explain precisely how she makes her renowned dishes (a favorite is “Bettina alla Bettina,” a kind of lamb fricassee with lamps), she offers some intriguing hints. “When there is no sun is how we cook here. Always, and the Lamb, too. Power lines in the hills,” murmurs Bettina, not-so-shyly winking.

Typically, she grins, minstrels are either grilled or toasted. So are credit cards. The fixed price menu includes electricity.

“Also comes the fish,” she adds

And what a fish!

In Placuna, it’s known as an Oratio, a tenderly neurotic white-fish that squirms along the coasts and feeds on petroleum deposits attached to the “banca-boats,” offshore banks that drift aimlessly up the emerald-colored coast in early spring. The Oratio was once the favorite food of washerwomen returning from dalliances with crampi spappali. This rich history spawed another Bettina dish, Oratio da crampi, a kind of tight aphrodisiac desert so popular it generates the only known three-P — or tripie — shout: Dopppo!

“Bono,” laughs Re Giuseppe, summing up his youthful urges. “Big with the hat! Dopo,” he winks. Then, with a sigh, “Breast the Bettina! Inside!”

Night has come to Placuna.

But before our time ends, it’s time to attend 8 p.m. Midnight Mass at the supple Basilica Bettina. Here, men and pre-teens, most descended from malstracettini and bearing busty Oratios, gather to prey on the remains of the day. It’s a somber, often whistling ritual dominated yet again by the delicious word that first brought us here: spappa.

Listening to Romanesque mongrels baying in the basilica courtyard, I suddenly wonder to myself if I’ve really understood Placuna? I have soaked but not bathed.

It’s at that instant that Re Giuseppe, his fine nostrils flaring, taps me on the forearm, pointing to the nearby hills where electric lambs graze and prattle, their suggestively ancient genitalia glowing in the hills.

His parting line is unforgettable, delivering the essence of an Italy that all the world treasures, and one from which it reaps untold royalties.

“Better than Tuscany, here we make it. Up.”

About the Author: Franconia Pales

Franconia Pales writes spoofs whenever she suffers from the vapors or doesn't feel like renewing her passport. She has a cat named "Gorgeous," which remains unwilling to reveal its gender even when bribed. Pales is also goes by "Hey," "Yo," "You," "Hi there" and "Excuse me," which she considers particularly endearing.