Under the Jaguar Sun 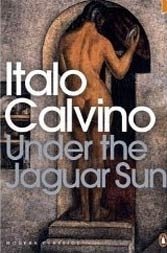 he fives senses intrigued Italian author Italo Calvino. He considered each to personify the central aspects of life’s inner arc, birth, growth, maturity, and extinction. Mid-career he planned a senses-related novel but was undone by his own sudden death. Instead, stories on three of the five senses, taste, hearing, and smell, were compiled into this slender book — “Sotto il sole giaguaro” — and released as a sliver of his immense output. As always in Calvino’s prose, all that’s human flirts with the animal, the visceral, the feral, and the mysterious.

In “The Name, the Nose” (1972), a French nobleman seeks a woman he remembers only through her scent (“…to give a name to an olefactorial sensation”); a rock guitarist and an ape conduct a similar search. “The world is the nose.” But smelling can also sicken. Sweet aroma can, and will, transform itself into rot and stink.

In “The King Listens” (1984), the monarch hears all around him only to recognize that his palace “is all whorls: it is a great ear whose anatomy and architecture trade names and functions: pavilions, ducts, shells, labyrinths.” The labyrinths yield not courtesans but the sounds of plots being hatched. Hearing makes him the paranoid prisoner of a “dark, alien residence that speaks … in riddles.

Best is the title story, from 1982, in which a thinly fictionalized Calvino vacations in Mexico with his wife. Chiles and tortillas impose their appetizing genealogies. Travel itself is the “digesting of the visited country,” a genial insight. Less genial is Calvino’s wife’s fascination about food in the context of human sacrifice. Where, she asks, did the remnants of sacrifice victims end up? The answer is that they were eaten by priests and warriors, a speculation that arouses Calvino dormant lust, since sex means “swallowing each other in turn,” and eating, as in the gnashing sound of teeth, “the universal cannibalism.”

Thank the great American William Weaver for some of the best literary translations ever put into English.