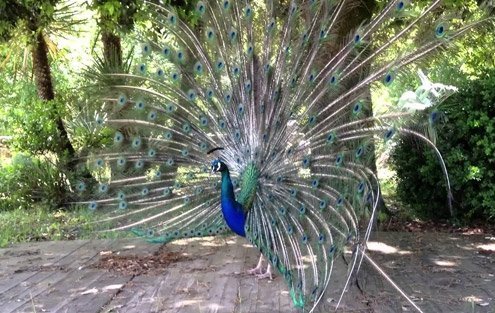 ear San Casciano, in Italy’s hilly and wine-rich Chianti region, is a pale yellow Renaissance villa surrounded by tastefully manicured Italian gardens. The luxurious property spans some 190 acres rich in pine and oak woods, gurgling streams and rolling hills. From afar the villa looks like something from out of “Under Tuscan Sun,” a place where farmers till the land, harvest grapes and drink wine from the local bounty.

But the scene changes when you walk inside. Peacocks appear and strut. Chanting and the thumping sound of bare feet break the quaint quiet. The region’s rich red wine is nowhere to be found, nor is any wine. Alcohol is not welcome here.

For decades, the onetime Medici villa has been a Krishna temple known as Villa Vrindavana, named after what was believed to be the Hindu god’s eternal residence. Devotees of the Hare Krishna movement quietly share faith and lodging in way that has more in common with a 1970s spiritual commune than with anything visible elsewhere in Tuscany, among Italy’s richest and most sought after regions.

Though Italy is a largely Catholic country, eastern faiths of all kinds have long maintained an active presence. At the same time, the Krisha movement, once championed in the West by Beatles member George Harrison, has lost some of the luster it had in the years after its founding, when the “Hare Krisha” mantra was a staple in musical culture. Early on, the movement, which bans the eating of meat, gambling, drinking, and discourages casual sex, attracted counterculture critics of the Western lifestyle. That appeal has waned.

“Society has become much more individualistic and people aren’t inclined to communal life that much anymore,” says Mauro Bombieri, the villa’s president. The 51-year-old Bombieri is a lean, smiling, and soft-spoken man known to his fellow devotees as Parabhakti das, the spiritual name given to him during a 1979 French initiation at age 16. “I was a very inquisitive boy. My spiritual search started when I was about 10. I wanted to know the meaning of life, if God existed, that sort of thing, and found my answer in ancient Indian culture…. Of course my family opposed it. But they got over it pretty quickly.”

Bombieri joined the villa at the end of 1980, living here as a celibate monk. He later left, marrying a non-devotee, and had a daughter. “My spiritual journey continued on as I worked for secular institutions,” says Bombieri. “But around 2000 I felt a strong urge to be more active in the movement. So I moved back.” Though he spends most of his time in the villa, Bombieri often travels to Turin, where his wife and daughter live.

These days he manages a community of between 20 and 100 permanent residents, depending on the season. “The number goes down during the winter because it’s so cold. Some people come for a few months, some people stay for years.”

The New York-based International Society for Krishna Consciousness (ISKON) bought the sprawling 16th-century villa in 1966, the year of the organization’s founding. “The villa was abandoned when we found it, used only for storage and quite dilapidated,” says Bombieri. “A lot of renowned authors and historical figure lived here. Machiavelli supposedly wrote his masterpiece ‘The Prince’ while exiled here. In World War II it was used as a military headquarter and then pretty much abandoned.” The movement, he says, is working to fully restore the villa and install a museum of Vedic [Sanskrit] art, “which will be the only one of its kind in Italy.”

The commune is self-sufficient, says Bombieri. “We grow our own produce, cut and use our own wood for heating. We publish literature that we sell, unless people can’t afford it, in which case we give it to them for free. Later, we’ll charge admission to the museum. And of course we get donations. It’s hard, though, because western culture doesn’t really conceive of donating freely to the temple. You have a deacon going around with a basket collecting Catholic Mass offerings, but you don’t have people spontaneously showing up at the temple with offerings, as they do in India. Indians who live in Italy do show up with fruit, milk, whatever they can afford to give. Most are first generation immigrants with limited resources, but they know that what we do here is important for everybody.”

As we chat, a group of residents wait silently on visiting yoga students who have chosen the villa as a retreat and are now having lunch under the porch. The students like they’re in a stupor. “They’re coffee-deprived,” laughs Bombieri. “For us coffee is a drug. If I drank an espresso I’d stay awake for two days. We don’t use it and ask people that visit us to do the same.”

Bombieri wears a white sheet-like garment that folds around his body and an off white vest. The rest of the residents do the same. “It’s not mandatory but we prefer to be simply dressed. So there’s no difference between the rich and the poor. It also conveys a spiritual message when we travel or run errands in town.”

Over the years, the surrounding San Casciano community has grown accustomed to Villa Vrindavana and its members, who tend to rise well before dawn, at 3:30 or 4 a.m. for ceremonies and meditation. “They know us. They know what we’re about,” says Bombieri. “And when they don’t, the reaction we get, most of the time, is curiosity and acceptance. It’s not like 30-35 years ago, when people where shocked by the way we dressed, or by our haircuts. Society is so diverse now that we don’t stand out so much anymore. Occasionally, when someone mocks us, we try to laugh it off.”

The residents and the yoga students are now exchanging a few words in English. “We’re an international group. We have mainly Italians, but also Russians, Spaniards, Ukrainians. If you live here you’re bound to learn English or else you won’t be able to communicate.”

As for the peacocks, Bombieri likes the aesthetic touch. “We like them. They’re beautiful. They’re not holy, like the cows, for example, but they do recur in Indian spirituality, which appreciates beauty. So we keep them around.”

Bombieri rejects the notion that his community, and its customs, is removed from the world around it. “We’re not isolated at all. We read the papers, we’re on the web, and use mobile phones. The people who choose to live here full time do so because they feel they can further a spiritual search. We don’t pursue the pivotal Western values of success, fame, wealth, but that doesn’t isolate us from the rest of society.”