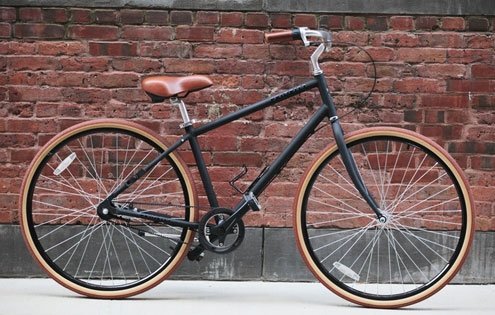 Dave Weiner's bike is his own creation, made of aluminum and driven by a belt, not chains.
W

hen I first met Dave Weiner we were both holding red plastic cups filled with cheap beer at a party in Isla Vista, the Santa Barbara college community overlooking the beach where we lived at the time. Both of us were working towards our degrees while partying as much as we could. We each had part-time jobs: mine in a clothing store downtown; his as a mechanic at the campus bike shop.

A little later in life, we again bumped into each other in Manhattan. By then he was 25 and software industry career was taking off at a vertiginous pace. He’d published a book and was well on his way to becoming CEO of the multi-national software company where he worked. He lived in a large apartment, wore tailored suits and, I admit, looked tired and even a little weary — like so many other young ambitious men in New York City.

Almost a decade later, things have changed. For starters, Dave is now married with a two-year-old son. He’s also no longer in the software business. In a society that tends to use the word “transformation” too often, Dave has transformed himself.

He returned to his roots: bikes.

“One day,” he explained, beginning our catch-up chat in New York, “I decided that the corporate lifestyle wasn’t for me. I was an executive traveling every day. I didn’t have any time for the things that mattered to me. I had to ask myself what was going to make my family and I happier. That I made a ton of money or that I was healthy and could spend time with them?”

Today, Dave wears a broad smile. He’s made his choice. A young looking 34, he wears a t-shirt and jeans, his blond curls neatly combed back, his designer reading glasses are the only visible signs of a past in the corporate environment.

He continues: “I quit my job, fleshed out an old business plan, and started working on it. And here I am.”

Where we are is the basement of an office building in Tribeca. Dave stands against a wall of tools showing me his latest accomplishment: a maintenance free bike buyers can assemble themselves.

“I’ve always been a pretty handy dude. It’s intuitive to me. I’ve built and rebuilt engines on cars and motorcycles. My grandfather used to fix things around the house during the summer. He taught me a lot; he was my hero. To me, figuring out where a squeak in a bike came from wasn’t very different from working on making software do what I want it to. It’s the same mindset: mechanical and logic driven. Or at least that’s how I see it.” The last comment may have been in response to the doubting look on my face, since software and mechanics are both completely alien to me.

Dave’s bike, which he sees as “perfect for the recreational biker,” is sleek, stylish and sexy. More important, however, it dispenses with chains in favor of a belt drive. It’s also made from aluminum, which makes it lightweight. The bike itself comes, which sells for under $400, in a box and can be assembled in four basic steps.

To publicize, market and sell the bike concept, he started a company called Priority Bicycles (“Life’s too short to ride a bad bicycle,” he likes to say).

“Before starting my business,” he tells me, “I ran my business plan by friends. Half of them thought I was crazy for wanting to start another bike company, because there are so many.” Dave was undeterred. He got back in touch with contacts in the bike industry and launched Priority on Kickstarter, the Internet platform for people interested in appealing directly to social media for the funding of creative projects. His goal was to raise $30,000. In 10 days later he’d raised $400,000. “Those who pledged support got a water bottle for $15 or a bike for $384. Some just donated a dollar or two because they liked the idea.”

And it’s the idea that matters.

For Dave, it was all about focusing on his real priorities. “That’s what I really wanted to do when I quit my job and started this company. I don’t know that I’ll ever make as much money as I was making in software, but if I can get more people on bikes, have a lot of fun doing it, spend more time with my family and feel great about the product am delivering, it’s all worth it to me.”

Looking at the sleek machine in front of me and thinking of Dave’s progress in life, one word comes to mind: unchained.