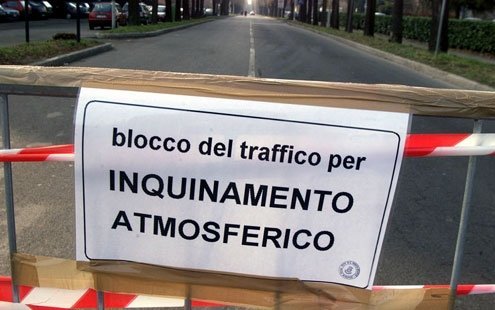 Too little, too late?
I

live in Milan, Italy, a city buried in air pollution. A year ago, I was diagnosed with chronic bronchitis as a result. “The only cure is to pack your bags and get out of here,” my doctor told me. He was right. While vacationing last summer, my cough went away. I didn’t even need my inhaler. When I came back, so did the cough.

Even the neighborhood pharmacist who fills my prescription hacks away. “Ask anyone who works in the shops around here. Most of us have problems.”

I checked. While both the newsstand man and dry cleaner seem healthy enough, the appliance salesman, the lady selling household goods, the man in the clothing store, the gas station attendant, the sons of the family that run the local hardware store, all suffer from some kind of respiratory distress.

The region’s geography doesn’t help. Milan lies on a plain surrounded by mountains. It’s like living on the bottom of a bucket. Wind rarely sweeps through, trapping pollution generated by industry, heating and traffic.

Instead of motivating solutions, this reality has instead become an excuse for inaction. Local administrations, past and present, have systematically ignored basic European guidelines that limit the number of above-the-threshold pollution days to 35 a year. That number should have been lowered to seven days beginning on Jan. 1, but yet another deadline lapsed. Such lapses have become commonplace.

On average, Milan has more than a 100 high-pollution days annually. The main culprits are sulfur dioxide, nitrogen dioxide, carbon monoxide, ozone, benzene, and PM-10 particulates, microscopic particles that mesh dangerously with human tissue. In the open air, the particles, polveri sottili in Italian, represent a mix of toxins and carcinogenic chemicals. Their main source is cars, buses and trucks. There are no safe levels.

In Milan, concentrations are twice the European average. The most dangerous PM-10s have a diameter of less than 2.5 micrometers (known as “um”) and can penetrate deep into the lungs and blood stream, causing inflammation, clots and tumors. Breathing in such particles exposes the body to a greater risk of cardiovascular diseases — strokes or heart attack — as well as a variety of respiratory illnesses, including asthma, chronic bronchitis and lung cancer.

The literature on the subject is alarming. In 2003, an Italian medical study suggested that breathing Milan’s benzene-laced air was tantamount to smoking 15 cigarettes a day. Many studies have linked the smog produced by traffic and heavy industry to health woes. “The Lancet,” the authoritative British medical magazine, recently reported a study suggesting that youths aged 10 to 18 living within a kilometer large traffic arteries were more likely to suffer from permanent lung damage, some of which would manifest itself only later in life. “The New England Journal of Medicine” has associated particulates with a 24 percent increase in the incidence of first heart attacks and strokes in post-menopausal women and a 76 percent increase in risk of death from cardiovascular disease compared to the general population. A more recent Italian study, published in “Epidemiologia Prevenzione” (“Preventive Epidemiology”) correlated smog levels with hospital admissions and deaths.

So far, the only response has come in the form of half-hearted attempts to limit traffic. Smog once generated more drastic measures, with vehicle usage restricted to odd and even-ending license plates, depending on the day. Starting in 2008, the city introduced “EcoPass,” a tax on high-polluting vehicles that breached the city center, or ZTL (Zone a Traffico Limitato). This has hardly made a dent. Of the first 60 “EcoPass” days, 36 produced pollution levels higher than the EU limit.

Even detailed information has been hard to come by. The dire effects of pollution on health in the Lombardy region emerged publicly only as a result of a lawsuit filed by Italian environmental groups.

Despite talk of improving Milan public transportation, only one new subway line is in the works. Damiano Di Simine, who heads the Lombardy chapter of Italy’s Legambiente, has urged a pollution tax on all vehicles and greater investment in public transport. “We have twice as many cars per capita as Londoners,” he says.

Creating bicycle paths has also been mentioned. So has creating incentives to get citizens and businesses to invest in clean, renewable energy sources. But those who do want to install solar panels often find themselves thwarted by prohibitive costs and various bureaucratic entanglements.

What hasn’t been discussed in detail is curbing larger sources of pollution, regional power plants and factories. Such action would involve stricter nationwide environmental standards that no Italian government has so far been inclined to consider seriously.

In the United States, the Environmental Protection Agency, spurred by the Obama Administration, has proposed stricter standards for smog-causing pollutants, with legislation scheduled to take effect in August and be phased in over two decades. Its $19-to-$90 billion annual cost through 2020 would be borne largely by manufacturers, oil refiners and utilities. Failure of state and local government to follow through with the new regulations would result in fines and loss of federal highway funding.

In Lombardy, Codacons, a consumer and environmental association, has launched a class action suit against the region’s governor, Roberto Formigoni, its president, Guido Podestà, as well as Milan Mayor Letizia Moratti. All three are being probed by magistrates for allegedly violating a 2002 decree, based on EU law, that calls on local and regional authorities to intervene against traffic when PM-10 levels surpass 35-day-a-year limit.

When I tell my husband that I intend to join the suit, he shrugs me off. “Don’t expect to get anything out of that,” he tells me.

In the meantime, I try to avoid breathing polveri sottili, and even that’s a challenge. While asking for a Europe-approved anti pollution mask known as the EN 149 FFP2, a sales clerk selling articoli sanitari, or health products, just snickered. “We don’t carry that stuff,” she told me.

My neighborhood pharmacist is amused. He carries only normal paper masks, he tells me. When I tell him they’re useless against micro-particles, he shouts to his back room assistant, “Giusy, don’t we have Europe approved masks? The ones that work?” They both laugh. Meanwhile, the pharmacist coughs.

I read recently about nasal air filters, disposable devices made to block airborne particulates. They’re generally considered far more effective than anything now available on the Italian market. Giampaolo Landi di Chiavenna, who heads Milan’s health department, has said that if the device proves effective based on a test group of athletes and local police, he’ll promote the nose filters for general use.

So far, though, it’s only talk.