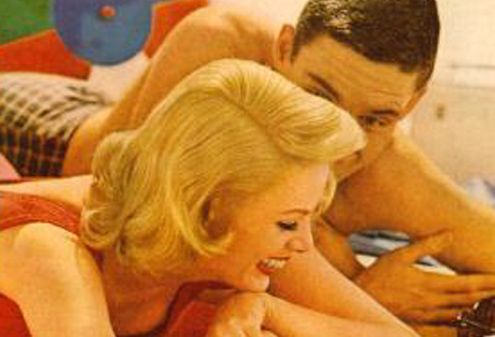 t was 1982 when I first colored my brown hair blonde. My sister and I went to Jamaica and I wanted to return with the look that something had happened to me. Something exotic. So I brought a box of hair color with me and became a blonde. When the locals saw my before and after, their response was uttered with cocked head, “What happened to your hair?”

I suppose they hadn’t heard the news. “Blondes Have More Fun.”

“Blondes Have More Fun” was a successful marketing campaign penned in the 1950’s by Shirley Polykoff for Clairol. Before the slogan, only seven percent of women dyed their hair. By the end of the 1970’s, the number was 40 percent. For a mere $6, you could be the fun-loving girl everyone wanted to be around. Who could say no to that?

Marilyn Monroe strengthened the notion of the golden goddess with iconic success, adding that blondes are somehow innately dumb. But it didn’t stop the desire to imitate. In my lifetime, it’s been Twiggy, Madonna, Brittany Spears, Paris Hilton, to name just a few. If you want to get ahead, go blonde.

In America, “going blonde” or “getting highlights” is an ongoing national pastime, if not an initiation rite, with six out of 10 women signing on. Seems if you haven’t been blonde or highlighted your hair sometime in your life as a woman, it’s almost unpatriotic. This applies to blacks, Hispanics and Asians, whose black tresses turn reddish when lightened.

“Light hair makes a woman look younger” is the current cultural motto, widely accepted by women 45 and up, with this demographic making up 35 percent in hair color sales. Baby booming women can’t stand the thought of looking 50 when they’re 50. Any truly appreciated compliment must also include a shocked “No way, you’re not 50! I thought you were 35!” Secretly, going blonde can allay an aging woman’s fear that her husband will trade her in for younger eye candy. Being blonde, she thinks, may help save her marriage.

It’s not news that America is obsessed with staying young and the fountain of youth can be found at the local drugstore for a mere $10.49. The colors range from Platinum, Ash, Sunny and Sandy to Golden, Honey, and Strawberry, to name just a few. From a box, dying one’s hair the first time is the easy part. It’s just like shampooing one’s hair. Wash it in, wait 30 minutes, wash it out and shazaam! You’re finished. Keeping one’s hair blonde is the hard part requiring constant upkeep. If only hair didn’t grow. But grow it does quickly giving away the secret of the pretense of youth. Dark roots quickly betray the facade.

I was blonde for over two decades and I was often asked if I was a “real blonde,” this felt equivalent to asking if I was a diamond or cubic zirconium. I would answer coyly, “I was born witih this hair color, you can count on that,” which was true enough. Most Caucasian babies come in to the world toting a downy head. Of course, only intimacy would bare the truth. It made sex in the dark a must.

A box of hair color is the do-it yourself way to go blonde, but in New York, going to a salon is more prestigious. I over heard in the gym locker room just last week a group of twenty-somethings discussing the cost of their “colorist.”

“Oh yes, I just had to get my highlights done. It took 2 1/2 hours and cost $225 with tip. My colorist weaves in three different colors to make it look natural. He’s totally worth it.”

A golden haired girl replies, “Oh yeah, my colorist is great too. My last treatment was $270 I used to get a foil but now I get a balayage.”

The special jargon raises the price and increases the allure of sophistication and uniqueness.

But blonde is anything but unique. Hillary Clinton can be seen campaigning with a honey head, a far cry from her dark days at Wellesley. John McCain’s wife Cindy is sporting platinum. Blonde is so American it is presidential.

It also reaches the other extreme. On the Internet, type in the keyword “blonde girl” and Goggle brings up pages and pages of naked bodies with nary a dark hair in sight. Pornography loves the sexy blonde. From actresses to news anchors, the way to attract attention is to wear yourself like a lighthouse.

My brother Thomas has sandy brown hair and his wife, dark walnut. Just as Mendel would predict, all of his four children have shades of brown hair. Their eldest daughter, Margaret, who grew her hair long, had the silkiest, shiniest commercial-ready hair I’d ever seen. Soft to the touch, luxurious. When I arrived in Ohio for her wedding last summer I didn’t recognize her. She’d gone blonde. At first I registered disbelief and dismay, then understanding. I was her age when I too wanted to stand out and look transformed.

Then it hit me. If I felt this way about her, then surely I was looking at myself. It was at this moment I decided to come home to my natural brown.

Coloring my hair from a box, I had always used the highest lifting color in the L’Oreal range of 10, also known as Lightest Natural Blonde. I decided to slowly darken in stages, moving to 9, then 8, hoping no one would notice. Finally I would take on number 7, Light Golden Brown, what I hoped to be my home color. When I applied the 7, I was a combination of nervous calm. I was ready for brown, but not sure at all if I’d recognize the me I saw when the color was set. And, at this point I was just guessing at my natural light brown, the one I remember from the girl I was barely past a teenager.

It’s strange how unavailable a young girl is to her own beauty. Everything she is she wants to change. I certainly was convinced I needed heavy concealer for my face, a constant coating of lip-gloss on my lips and the clothes that matched the magazines to be worthy of any term close to “beautiful.” Anyone who said I was in my natural state was surely patronizing me. I could not be convinced.

When I wash off and dry the effects of 7, I look strangely unnatural, very un-me. It is the color of wheat in autumn, ready for harvest. I look from mirror to mirror trying to get reacquainted with my true shade. I am transported back in time.

My nickname may never again be “Blondie,” nor will I be the tall blonde walking down the street turning heads. But I’ll be at home with the truth of what I’ve always secretly been. A brown-haired, brown eyed girl.