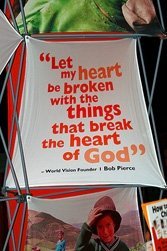 Lording over a partnership.
H

What’s wrong using global reach to expose clandestine trash-peddlers? Where’s the rub making the world safer for women and children? What’s not to like about putting sex tourists on a short leash?

Not much, God knows.

And he knows a lot.

Joseph Mettiamo, who advises World Vision on child protection, told The New York Times his organization now has partners in monitoring international child abuse. “We have a very active and engaged government power working with us.”

That would be the U.S. State Department and the INS.

According to its website “an international partnership of Christians whose mission is to follow our Lord and Savior Jesus Christ in working with the poor and oppressed to promote human transformation, seek justice and bear witness to the good news of the Kingdom of God.”

Though policy and evangelism overlapped in the Reagan 1980s — God Bless America (ardent Puritan or doubting Quaker) is old hat — the “Jesus Deliver America” version is something else again, a virulent aberration hatched from terrorism.

Islamic extremists have accomplished that which European terrorists of the communist generation only dreamed of, crafting a patriotic adversary from a democratic state by radicalizing its already strong religious streak.

Underlying the Iraq war were two tenets, that Americans deserved relief from evil and Iraqis from barbarism, as mandated by leaders seeking justice and bearing witness.

It was a World Vision war. Conviction, not law, took precedence.

Similarly, rescuing the world’s children from deviants and exploiters isn’t about social awareness or multinational collaboration, but about peddling Christian moral rectitude for global benefit. Government-sponsored teaching programs and sex education are polarized by the same kinds of bias.

Bill Clinton, speaking of the Bush Administration, got it right. “Politics is not about religion, and we should govern on the basis of evidence, not theology.” (Go ahead, call him a sleaze: his political instincts remain superlative.)

“I say that freedom is America’s gift to the world,” George W. Bush told Bob Woodward last year. “Freedom is God’s gift to everybody in the world. I believe that.”

Leaders that proselytize are naturally unilateral, since duty is a pledge, not an option.

When Bush calls child exploitation a “special evil” he diminishes its status as criminal act that grows in proportion to the moral outrage directed against it, a strong argument for leaving God out of the policy loop.

But this president is a sermonic sledgehammer working from an evangelical playbook. He’s cheerfully anti-intellectual and direct, bad news for opportunistic Europeans who like anything but black and white and don’t trust moralists.

When the late Ronald Reagan, schooled by the Cold War, spoke of the Evil Empire he was being principled. It’s fiercer for Bush, who watched the towers fall: “In God We Trust” isn’t a slogan and “God Bless America” more than a song. September 11 radicalized his faith; he was empowered.

To label him neo-conservative or right-wing is nonsense. Most conservative thinking champions the secular state, preserves the status quo and entertains alliances with non-believers. The traditional far-right, meanwhile, guzzles nationalism and militarism.

Bush is neither neo-conservative nor neo-Fascist. Read the World Vision statement and extrapolate.

Hard to fault the World Vision crowd for wanting to police wayward penises in Bhutan; Good News comes with a price-tag. So does messianic strategy.

Shared global goals — working to end the sex or drug trade, say — lose their appeal among skeptics when their chief promoters insist on moral absolutism that both manipulates and offends. It begins to sound like enlightened fundamentalism practiced by the most powerful nation on earth.

But zealots don’t care, and say so.

Zealots knows they’re right, a foot in the Kingdom. Zealots change the world on behalf of a savior, which makes them accountable only to a power that knows no mortal challenge.

The hardline Bush view is not shared by the whole of the American governing apparatus, a mildly redeeming thought (as if the Bible needs mention.)

It does, however, set the tone for a stagehand view of the world, in which foreign nations are expected to comply with America’s patriotic policing priorities and its bulked-up virtue.

If you respond to leadership practically, refusing the lure of the judgmental, this is not appetizing. If you abhor preaching it can give you heart disease. Preachers are an anathema to the critical mind. Great civilizations have tripped on giving them too wide a berth.

Be alert to this. Four more years of Godly road-testing may lie ahead.