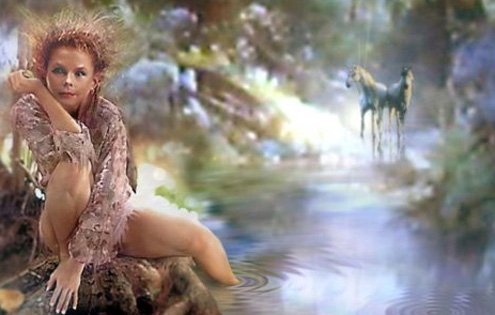 When your name belongs to a fairy in a Ridley Scott movie, you know you're in for trouble.
C

all me Una. That’s how you pronounce my name. But just so you know, this is how it is spelled: Oonagh. Yes, it’s Irish.

My mother named me after her childhood friend. Apparently the two girls made a pact that when they each had a daughter they would exchange names. And so, in respect to the sworn agreement, I was named Oonagh.

Oonagh rhymes with “tuna.” It also rhymes with “baboona.” I give you these examples so you can imagine how much fun it was growing up.

Famous personalities with the name include the hostess of the Christmas curry buffet in “Bridget Jones’s Diary,” a character in Spenser’s “Fairie Queene,” Charlie Chaplin’s wife (and Eugene O’Neill’s daughter), and a fairy in Ridley Scott’s 1985 film “Legend.”

Anyone who’s grown up with a bizarre name is used to being asked, “What does it mean? How do you spell/pronounce it? Where’s it from?” But I bet very few people have tried to make their home in a country where their name, sounded out — una — is an indefinite article. Just call me “a.”

When I first moved to Italy in 1987, I decided to simplify my life so I wouldn’t have to go through the hassle of explaining my name every single time I introduced myself. I started using the Italianate version of my middle name, Louise. It only lasted a couple of weeks, until my Dad called the apartment and asked to speak with Oonagh. No one knew who this person was. “Oh, you mean Luisa!” And that was the end of that.

Living in Italy with the name Oonagh requires considerable patience. More than once my name has been transformed into the classic Abbott and Costello’s “Who’s On First” skit. An example: I once asked the butcher to put aside a special cut of meat for me. When I returned to get it he told me that he and his colleague had had the funniest dialogue. It went like this:

I live in Tuscany, where Tuscans frequently use the determinate article when speaking. For example, la is often placed before a female name:

And here, where I live, I am known as La Una: a definite article carves out the identity of that which is indefinite. Easy to say, hard to write, and the story of my life.