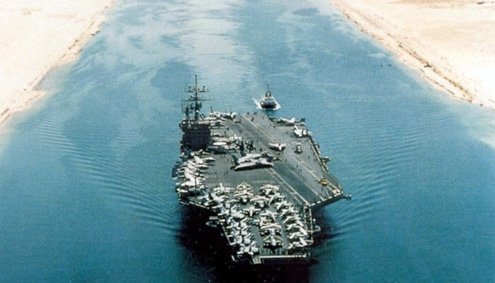 y Friday-to-remenber began with a car ride from Providence, Rhode Island to Foxwoods Resort Casino in Ledyard, Connecticut where Sophie Loren would be appearing as part of her one-woman stage tour. My Uber driver cheerfully announced it would be his first drive to Connecticut, which made me worry I might be in for an hour of forced chatter. That’s always an Uber-risk — a talkative driver when you just want to stare out the window.

But this was different. My driver told me he’d served in the Navy for six years aboard the massive carrier USS Dwight D. Eisenhower. He’d participated in Operation Desert Storm, the first Iraq war. He’d been stationed in Italy and Israel. He recalled the Eisenhower navigating the Suez Canal, a detail that delighted me because of the canal’s history. In July 1956, Egyptian President Gamal Abdel Nasser announced the nationalizing of the lucrative canal, removing it from Anglo-French control. British Prime Minister Anthony Eden was outraged. He tried and failed to discredit Egyptian management while preparing military reprisals. In October 1956, Israel, Britain and France attacked Egypt and took the canal back.

The Uber driver told me how the Eisenhower sometimes navigated the canal with six other Navy vessels. I’m no rah-rah patriot but it was hard not to imagine the power radiated by six vessels streaming through a tiny canal. It made me think of D-Day footage and the thousands of vessels headed for the French coast.

But my day didn’t end with tales of Suez. Next up was the question and answer session with Loren at the casino, which is owned and operated by the Mashantucket Pequot Tribal Nation (Native American territory hosts gambling casinos throughout the U.S.). As I navigated the casino maze looking for the theater, I couldn’t help but think of the USS Eisenhower, as in: “Why does everything in America have to be enormous?”

I dashed up three floors, down two staircases, across a suspended walkway, weaving around intoxicated men and the tottering elderly. But I made it.

One look at the audience made me realize four things. First, some Italian-Americans think of themselves as Italian because, even though they can’t speak a word of Italian, their “Nonna” once made them manicotti. Second, I wasn’t prepared for the dress code: expansive blowouts, blue eyeshadow, shirts with rhinestones arranged in glitzy patters like tiger stripes, and plenty of stage jewelry. Third, everyone seemed to know everybody else (cue loud laughter). Fourth, I was so outweighed by senior citizens I brought the average age down by at least a month.

The moderator was a longtime Hollywood and entertainment reporter named Bill Harris, a small man with a white mop of hair and large walrus-like whiskers. Harris nearly tripped over a box as he tried to bring Loren on stage, a bad omen. He seemed to want to guide Loren through the paces, too often making mistakes Loren had to correct.

Anyone who’s read about Loren’s life — she’s now 81 — knows she’s her own woman. She’s aged physically, of course, but her recollections of her postwar life and times remain intimate and intense. She once worried about whether she needed acting lessons but legendary director Vittorio de Sica intervened. “You’re just fine the way you are,” he told her (she won a Best Actress Oscar in 1962 for her work in De Sica’s “Two Women.”)

Loren always refused cosmetic surgery. She said today’s actresses, many of whom swear by it, end up looking alike — “They look in the mirror and don’t recognize themselves!” It’s an interesting perspective in a time when everyone insists they’re somehow different and special.

Asked the secret behind her enduring beauty, Harris had to chime in with “happiness.” But Loren wouldn’t have it. “Good features, good body, and good personality,” she said. With honesty to spare.