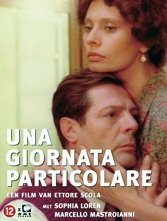 In his career’s final trimester Marcello Mastroanni wore a death mask. It was as if at 50 he’d lived the funk of three lifetimes. You can’t blame director Ettore Scola for taping into the melancholy and tossing in the less world-beaten Sophia Loren.

This is a strange film that borders on the dour. A bitter gay man (Gabriel, Mastroanni) strikes up a friendship with condominio neighbor Antonietta whose husband has dashed off to see the great event, Mussolini’s meeting with Hitler in Rome of 1938. She cares little for politics but is a regime girl by default. Gabriel (called a “wart, a traitor… an antifascist”) is at risk, Antonietta, mother of six, is out of harm’s way but unsatisfied. The film hinges on their unlikely one-day coupling.

Mastroanni’s Gabriel gets a gift of humanity before the dark ages settle in and Antonietta is awakened from social and sexual slumber. Scola, a Communist, does what’s necessary. MM and Loren are in fine form and make the story theirs. But as good as they are, it’s Mastroianni’s sad huff — here at the obvious service of anti-fascism — that prevails.