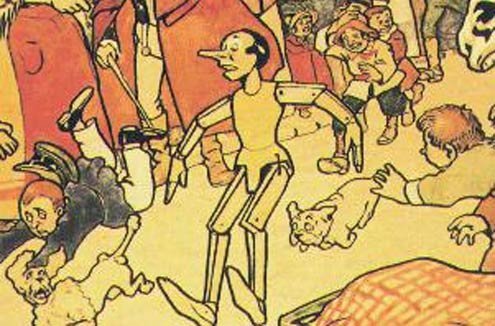 Cover of a 1911 edition of "The Adventures of Pinocchio."
T

Collodi — born in Florence as Carlo Lorenzini — began the story in 1881, choosing a dark and subversive fairy tale to illustrate the grim realities faced by children in Italy’s post-unification period.

Pinocchio was penned just a decade after the Risorgimento, a tumultuous period of political and social upheaval that witnessed the creation of a unified state in 1861 and culminated in the 1870 capture of Rome, which ended papal authority over the central Italy.

As Italy struggled to forge a collective national identity against the backdrop of the Industrial Revolution, it also had to deal with the mounting problem of exploited and destitute children. Italian society worried that child labor could lead to children becoming beggars, criminals, idlers, or vagabonds, with abandonment yielding even worse fates. “[I]t became a general conviction … that Italian society needed to care for its unfortunate, marginalized, mistreated, and poor children, children previously dependent, at best, on charity of ecclesiastical institutions,” writes Italy historian Carl Ipsen.

While the sons and daughters of the country’s bourgeoisie enjoyed educational privileges and some protection from the country’s raw side, the newly formed state decided to tie its identity to the safeguarding the interests of all children. Education, child labor, and juvenile delinquency were hotly debated, leading to introduction of progressive reforms. The 1859 Casati Law gave Italy the right to organize a national school system based on the centralized French model, effectively displacing the Roman Catholic Church as the bastion of teaching on the peninsula. The Piedmontese-Italian criminal code introduced the same year brought institutional care for child vagabonds. In 1873, children were forbidden from working as wandering entertainers while the landmark Coppino Law of 1877 mandated compulsory education through age nine, laying out penalties for those who kept children out of school.

A serialized story, Pinocchio first appeared in a children’s newspaper with the aim of educating and admonishing readers about the dangers of insolence, “serving as a vehicle of social instruction and, it would seem, of character building in the name of a productive, middle-class ethic,” writes Nicholas J. Perella in his illuminating “An Essay on Pinocchio.”

Independence war veteran and satirical journalist Collodi imagined Pinocchio as an archetype for the ragazzo di strada, or Dickens-era street urchin, mostly indolent youths who disliked authority but also needed to find a way to survive.

Carved into life by Geppetto, Pinocchio is immediately rebellious, impetuous and disobedient, fleeing home and getting Geppetto in trouble. Pinocchio tells the Talking Cricket, the “wise old philosopher” of Collodi’s tale, that school and learning a trade don’t interest him. Instead, the puppet-boy prefers “eating, drinking, sleeping, playing, and wandering around from morning till night.”

Such a lifestyle, the Cricket warns, will eventually land Pinocchio “in the hospital or prison.” Pinocchio explodes, flinging a hammer and killing the Cricket, adding murder to his rap sheet. Lying, which Disney immortalized through Pinocchio’s nose-sprout, is the least of his crimes.

Pinocchio’s pursuit of the “good life,” freedom and independence outside all social responsibility, represents the opposite of the obedience, productivity and conformity that the new Italy sought to instill in youth.

It’s no surprise that Pinocchio’s truant life begins to falter. He’s tormented by hunger, kidnapped, exploited by criminals and tricksters, imprisoned by everyone from a magistrate to a mad puppeteer and, more than once, faced with the prospect of a ghoulish death.

Pinocchio is duped by the Fox and the Cat, who loop a noose around his neck and leave him dangling for dead from a tree. “Good-by till tomorrow,” his would-be assassins tell him. “When we return in the morning, we hope you’ll be polite enough to let us find you dead and gone and with your mouth wide open.”

Astonishingly, this was the story’s grizzly original ending. Though Collodi resented being forced to write “childish twaddle” by his editors, he eventually agreed to provide a less troubling conclusion.

Brought back to life, Collodi still has Pinocchio face two more brushes with death — both brought about by willfully skipping school — before getting to the proverbial happy ending.

At Funland, Pinocchio is transformed into a donkey and sold off for his hide. Soon after, the Terrible Shark gulps him down. In its belly he’s reunited with the swallowed Geppetto, missing at sea for two years after having embarked on a search for his petulant puppet-son “far across the ocean,” in the “New World.”

Though he gets a four-month prison sentence for his misadventures with the Fox and Cat, Pinocchio is never fully held accountable. Only the Fairy with Turquoise Hair, a protecting, sister-mother figure (who also doubles as a spooky specter of death), successfully humbles the reckless Pinocchio. She finally grants his wish to become a human boy, but only after Pinocchio has become an obedient child by rescuing and nursing frail Geppetto back to health, redeeming himself “little by little” through schooling and diligent, honest work.

Pinocchio, who once chose begging rather than work for his supper, is now the most industrious of basket weavers, supporting himself and Geppetto on a small, hard-earned wage.

His transformation from marionette to donkey to model son of the new Italy reflects moral choices aligned intrinsically with Italy’s post-Unification ideals. Pinocchio is redeemed, Perella writes, thanks to his “unalterable acceptance of a rigid work ethic.” He conforms.

“How ridiculous I was as a Marionette,” says the flesh-and-bone child reflecting on “the old Pinocchio of wood,” a puppet unfastened to a new nation’s social strings.