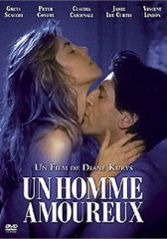 Memorable for three reasons: a young Greta Scacchi, a believably self-involved Peter Coyote, and a smarmy Jamie Lee Curtis, bitchily out of character. French director Diane Kurys puts her all into this everything-to-lose love affair between a married American actor (Coyote) and a British starlet (Scacchi) in Rome. The actor, Steve Elliott, has a career, Hollywood success, an attractive wife, etc., but forages for dynamite and a detonator. He thinks he’s in love with his sultry mistress but actually can’t get past himself: hence a man in love. Coyote, rarely given much elbow room in the States, got it from Kurys. He’s a fine actor.