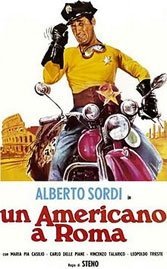 Steno’s charming but seditious farce about a delusional young Italian who wants to be American is a welcome departure from the sullen leadenness of 1950s neorealism. It also gave young Rome comedian Alberto Sordi Totò-style license to run amok, and he doesn’t waste a screwball minute. Here, he’s Nando Mericone, a homebody who lives with his parents and wants to be Gene Kelly, Fred Astaire, Joe DiMaggio or a Kansas City cop, depending on the day. A burlesque dancer in a throwaway troupe — Santi Bailor in art — obsessed Nando gargles in made-up American English (“localitation”), keeps a self-styled office water cooler in his bedroom, and copycats Elvis on the sly.

But while one side of the farce belongs to Sordi’s frenzied comic antics, another is a far slyer social satire on the exaggerated America-loving mania that crept into middle class Italian life in the decade following the 1944 liberation, aided and abetted by the sudden and confusing influx of American comic books characters and Hollywood movies.

Nando may want to be an amalgam of Gene, Fred, Joe, and Elvis, but Steno uses the nutty wish to mock the very culture Nando craves, since lots of it he can’t understand and doesn’t even like (forget yogurt and mustard). What he really wants, like most Rome archetypes, is to be different, appreciated, and if possible the center of attention. Dig just a little deeper, which Steno does using wartime flashbacks, and it’s hard set aside the bittersweet reality that poor Nando — who spends much of his time threatening to jump from the Coliseum — is stark raving mad.

While the story itself eventually collapses into absurdity, Sordi’s Nando is a pop culture necessity for anyone trying to make sense of the Italian-American puzzle, as well as the confusing effects of postwar change on a country that had yet to regain either footing or identity. Teenaged Ursula Andress, whose Bond movie breakthrough came decade later, has a bit part.