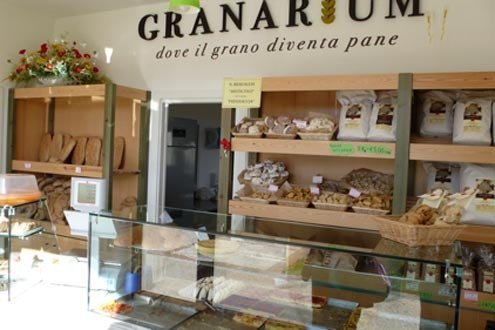 The Granarium's local shop, where all is homemade.
U

mbria is a land of practical people. They’re mostly down-to-earth, modest country-folk who generally prefer tradition to innovation. They dislike risks, large enterprises and sushi. They think they live in the best place on earth and there’s no need to change it.

True enough — at least the part about living in the best place — but the rest is rather maddening. I admit I don’t like sushi, but I could occasionally do with a green curry and a bit of curiosity.

But this is the B-side of slow life in Umbria. If you are motivated to do something — create a project or generate an enterprise — it takes forever.

I know from personal experience. I moved here and started a business after a decade of working in über-efficient North Europe. There were times when I thought we’d never make it.

That’s why I admire people who start something new, and who do so against all odds and against the never-ending bureaucracy; people who overcome the many delays and get past the mistrust of locals.

I recently met someone who fits that mold, Patrizia Lucarelli. Along with brother Gian Piero she’s built Granarium, a stone granary dedicated to the wheat their family produces. It is a Herculean effort and a totally novel way to preserve tradition. Artisan mills have almost disappeared in Italy. Hers is one of the very few national farms that actually grow the wheat they grind.

Not only that, the family also cultivates the wheat organically in local fields surrounding the mill and stores it without chemical preservatives, using ventilation and the summer sun to avoid fermentation and spoiling.

Then they grind it using antique machinery that they bought on eBay (yes), restored, and brought back to operational life. If that weren’t enough, they also make breads and cakes in a wood oven that they sell in their little shop and at various markets throughout the province.

And should I wax lyrical about the flavor? Come see and taste for yourself. The word flour takes on a completely different dimension. I might never find the courage to buy supermarket flour again.

(For best results, use artisan flour, minimal amounts of yeast, and let the bread rise for a long time.)

— Sprinkle the yeast over the water and stir until the yeast dissolves.

— In a food processor, combine flour, cheese, olive oil, sugar and salt. Mix briefly. Add egg first and then the yeast mixture. Mix at maximum speed until a soft ball of dough forms. Add additional water if the dough does not form a ball or is too dry.

— Alternatively mix ingredients by hand in a large bowl, then turn the dough out onto a lightly-floured surface and knead, adding more flour to prevent sticking, until smooth and elastic, approximately 10 minutes.

— Place the dough in a draft-free place, cover with a tea towel, and let it rise overnight, until doubled in bulk.

— About a half-hour before your meal, heat a cast iron skillet — you can also use a Mexican comal (griddle) —over medium flame. Transfer the dough on a table, and flatten it with a rolling pin until it is about 1 cm (1/2 inch) thick. Place the flatbread over the skillet and cook slowly until dry and golden. Cut into wedges and wrap it in a cotton tea towel to keep it warm until ready to serve.

— Fill the wedges with cured meats — no melted cheese please — or grilled sausages and leaf vegetables sauté with garlic and olive oil.

If you enjoy the result, all you need is to grow wheat, build a granary, start a company, and then check eBay for grinding equipment.