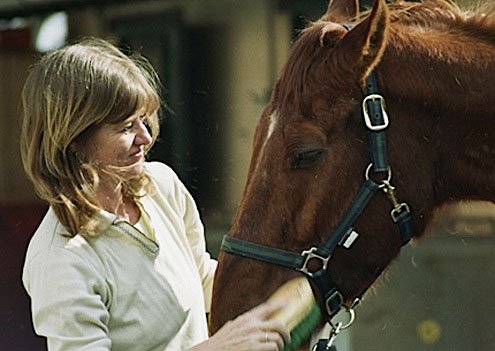 The author does some housecleaning.
L

ook out everyone. Here comes the “donna svenuta.” It was our guide speaking, and his words prompted peals of laughter from a group of riders at the front, as a jeep slowly drove past the horses. I was dimly aware of a female form in the passenger seat, bent double so that she was virtually on the floor. But with the clip-clopping of the horses’ hooves on the tarmac, and my need to concentrate on staying atop a decidedly frisky steed, it was clear that the mysterious fainted lady would have to wait. It was evidently an in-joke.

There was a lot of light-hearted banter as we set off early that morning on a day-long trek to see the Cascate delle Marmore, Europe’s highest waterfalls, in the depths of the Umbrian countryside. We were a mixed bunch who had been sorted into two groups on arrival at the stables, where the chief guide Agostino had paired everyone with a mount. As a last-minute addition to the excursion, I found myself with a horse that wouldn’t normally have been used for trekking. He was a French show jumper and, disconcertingly, worth a small fortune. I all but needed a ladder to climb on his back, but it was good to be given a real horse, instead of the half-dead nag offered by most stables.

It soon became apparent that this was a fast ride, as we charged off through the chestnut groves that cover the mountainside in this part of southern Umbria, near Spoleto. The horses were fit, the temperature still fresh and the shady paths through the forest were crying out to be galloped. Aside from the small gaggle of regulars, who had laughed knowingly at the fainted-lady joke, there was a woman in her 50s who had come with her husband, a younger woman from Rome and a lanky girl in her teens who was with her father. The girl was clearly of a nervous disposition, and as the day progressed, I would come to rue the fact that she was behind me.

In truth, there were a variety of hazards to be overcome as we wound our way down into valleys, along a dried-up river bed and up past a spectacular abandoned village to cross into the next range of mountains. Some of the going was very rough indeed, and the girl behind me went into near-hysterical mode at times, calling to her father and declaring that she loved him.

But as if by magic, whenever danger loomed, the white jeep owned by the stables would appear — this was clearly a highly organized expedition. When the path neared a steep ridge, a guide emerged as if from nowhere and helped riders negotiate it safely. Where the rocky river bed was strewn with boulders, another guide helped everyone dismount and lead their horses. With the sun moving higher into the sky, and the heat beginning to make itself felt, the frequent stops to pass round the water bottle were something to be looked forward to. It was 40 miles there and back, and suddenly it seemed an impossibly long way.

By now the conversation had all but fizzled, aside from intermittent panicky squeaks from the rear. We had met up with the slower group, and the long procession snaked down the last few trails before the break for lunch. The hills rolled, and the views seemed to stretch forever, but most people appeared oblivious to the beauty. When the white jeep was spotted, signaling salvation, there were cheers from some quarters; even the girl behind me laughed.

The group’s collective spirits soared another few degrees at the sight of two long trestle tables, complete with tablecloths and chairs, set enticingly in a glade of holm oaks. Agostino’s brother Giancarlo was grilling meat over a barbecue, while his two teenage daughters sliced bread and put wine and water on the table. The cold pasta with fresh tomatoes had been prepared by the brothers’ wives and sent out in the jeep, as had the dessert, the coffee and the liqueurs. The horses were led off to be watered, the riders took their places at table and the atmosphere became light-hearted once again. Now seemed the perfect time to get to the heart of this fainted lady business.

The story unfolded of a local dignitary and his lover, who meet for secret trysts at a huntsman’s shack in the woods near the stables. The affair has been going on for years, but the pair continue to behave in cloak-and-dagger style, much to the mirth of the locals. For most of the journey, the unfortunate woman is pushed down onto the floor and covered with a rug so that no one will know what she is up to.

The mystery solved, it was time to take a look at the waterfalls themselves, down a heart-stopping flight of steps that led to the belvedere. The experience was slightly marred by another fainting-lady episode as the woman in her 50s abruptly dropped senseless at my feet. The air was very heavy and a storm clearly brewing. With the help of my last drops of water and the ministrations of a rider who turned out to be a nurse, the woman was soon revived and helped back up the steps, where she gamely insisted on remounting her horse and completing the trek.

Halfway through the return journey, the younger woman from Rome proved she was less stalwart when, complaining of a blister on her nether regions, she announced that she could not go on. Apparently unfazed, Agostino fished out his mobile phone and in minutes the trusty white jeep had appeared to whisk the woman off, and to deliver another rider to take her horse the rest of the way home.

By now, the end was almost in sight, and the mood was one of victory and camaraderie. When the storm finally did break, it was greeted with good humor, although I privately cursed the size of my horse as I struggled to dismount from the slippery saddle. Sopping wet, the group joked and laughed its way along the last few miles. And this time I smiled knowingly as the jeep with the fainted lady passed on its way back from the day’s exertions.

The Centro Ippico La Somma is at Montebibico, 13 kilometers from Spoleto. It organizes rides ranging from an hour to all day, as well as night rides in summer. Accommodation available. Tel. 0743.54370 or 335.8348629. For further information see lasomma.it or email lasomma@val.it